Central Banks look at a variety of economic data and projections before setting policy.These datapoints are then applied to the central bank’s ope

Central bank policy is an important driver of movements in financial markets. Central bank officials gather, project, and analyze economic data to determine the future path of the economy and its relation to the bank’s policy goals. Challenges or deviations from the ideal path of the economy will often drive a central bank to policy action. However, the setting of a central bank policy is not as simple as issuing a press statement declaring a change in interest rates, an adjustment to asset purchases, or further supportive measures. Central bank policies must also be implemented through transactions in financial markets.

Central bank policies have a direct and oftentimes immediate impact on the FX markets. As central banks loosen or tighten policy, their respective currencies become more or less attractive to hold. Understanding the process by which central banks make such decisions is a valuable skill to any trader, as being able to predict what a central bank might do will give a greater depth of understanding to each key economic data release.

Central banks parse the same economic data that FX traders and other market participants watch closely. Unemployment, housing, and inflation are some of the key data points central bankers track as they meet to discuss and set policy. These indicators are important to GDP and to identifying expanding or slowing trends in a large economy. The DailyFX Economic Calendar is a great tool to help traders monitor the same data releases that central bankers are keeping a close eye on.

Beyond following the same economic data that market participants have access to, central banks employ hundreds of economists. These economists are specialized in a certain area of expertise and are often considered leaders in their field, making them the best choice to hold the responsibility of creating the projections that central banks will use to set policy. Economists create and model economic projections of the future path of the economy based on current data, expectations for the future, their knowledge of the subject area, and potential policy choices.

Central bankers use these models to anticipate where the economy is headed next and help evaluate the potential impact of their policy choices. Many central banks publish summaries of their economic and policy projections on a consistent basis, and these summaries are a valuable resource for traders looking to understand how an important driver of markets is viewing overall economic conditions.

The ever-evolving world economy has led to continual evolution of central bank policy frameworks. Monetary policy setting was once based on simple rules and equations that dictated a proper level of interest rates given the relationship between inflation and employment. The world has since become much more complex, and central banks have moved away this simplistic, rules-based approach to policy.

With these shifting tides in mind, the Federal Reserve and the ECB have both conducted reviews of their monetary policy frameworks. While the ECB’s review and conclusions are still underway, the Federal Reserve announced its findings and its new policy framework in the late summer of 2020. In this announcement, Fed central bankers recognized that the relationship between inflation and employment had changed such that the economy can tolerate higher employment levels without inflation becoming a threat. The Fed also changed its inflation policy from a symmetric 2% target to an average 2% target, meaning that Federal Reserve policy makers will now tolerate inflation higher than 2% so long as that higher inflation helps raise the average to 2%. In essence, this new framework communicates to the markets that the Fed will no longer be looking to tighten policy at the first signs of overheating but rather will allow policy to remain loose and the economy to heat up further.

Once the central bank reconciles new economic data and projections with its framework, it makes a decision. While such a decision was once as simple as raising or lowering rates, central bank toolkits have expanded dramatically since the financial crisis as central banks have played a larger role in supporting the financial system and the overall economy.

Before the financial crisis, the toolkit of most central banks was relatively standard. These central banks would set a short-term interest rate and control bank lending through reserve requirements and other similar metrics. The major exception to these simple operating tools was the Bank of Japan, which began to embark on “unconventional” policy tools beginning in the late 1990s, as Japan struggled to escape a major recession and deflation.

In the aftermath of the financial crisis, economies around the world remained stuck in a state of shock. Global central banks, led by the Federal Reserve, began to adopt the same unconventional policies introduced by the Bank of Japan. They purchased large amounts of government bonds to flood the financial system with liquidity and dropped and held their policy rates at zero or even in negative territory. During the crisis, central banks also used their lending powers to create new, targeted tools that could provide support to key areas of the financial system, like money market funds and large broker-dealers, that fell outside of the purview of traditional central bank support tools.

These unconventional tools have become a major part of the central bank’s toolkit and have been put to use to great effect during the Covid crisis. Beyond slashing policy rates back to the zero-lower bound, central banks expanded the scope of their support measures beyond anything seen during the financial crisis, pledging support to corporate bond markets, backstopping key areas of the financial system, and purchasing trillions in government bonds.

Why is confidence Important?

Following the financial crisis, central banks set out on a journey to manipulate longer-term rates and flood the financial system with liquidity in order to better support economic spending, growth, and inflation. Through large-scale asset purchase programs, better known as quantitative easing (QE), central banks have bought large quantities of government debt from the open market. Technically, these operations are similar to the traditional open market operations undertaken by central banks pre-crisis, just on a much larger scale. While the exact mechanism of action surrounding QE remains a point of debate, such programs drive down longer-term interest rates, help to support inflation, and oftentimes provide a tailwind to other financial markets.

QE has also risen in importance given the prolonged period of low rates that advanced economies have been faced with. Since central banks can no longer simply cut rates to the necessary level needed to jumpstart the economy during a recession, they have instead turned to further QE programs. Research suggests that an asset purchase program equivalent to around 1.5% of GDP has a similar impact as 25 basis point interest rate cut. With US interest rates at only 1.50% before the Covid crisis, and rates elsewhere even lower, continued QE programs should supplement the deficiency in traditional rate cuts. As such, asset purchase programs have ballooned since the Covid crisis began, sending central bank balance sheets to record levels. 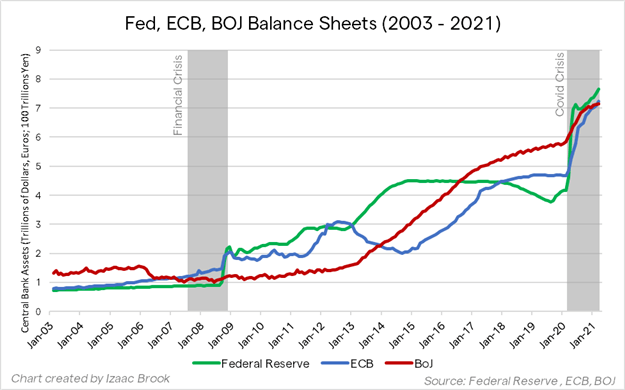 For the Federal Reserve, monetary policy is implemented through the Federal Reserve Bank of New York. Before the financial crisis, a decision on the Federal Funds Rate would be passed to markets desk traders. These traders would conduct open market operations with primary dealers. Primary dealers are large banks approved as trading counterparties of the NY Fed, and are required to make markets and support the issuance of US Government debt (Treasuries). The NY Fed markets desk would buy or sell a certain amount of Treasuries from these banks, adjusting the supply of liquidity in the financial system and pushing short-term rates into the FOMC’s desired range. This fine-tuning of liquidity was the process used by central banks around the world before the unconventional tools of the financial crisis were put to use. Once global financial systems were flooded with liquidity, policy setting had to evolve beyond this rudimentary method.

Following the QE operations undertaken by central banks during the financial crisis, traditional open market operations would not have enough of an impact on liquidity and credit conditions to materially tighten or loosen interest rates. The Fed’s main policy lever became interest on reserves, the rate at which banks earn for storing “freshly-printed” QE money directly at the Fed.

Activity in the Federal Funds Market shrunk drastically as banks no longer needed to seek out funds to maintain regulatory requirements and also no longer desired to lend to other banks on an unsecured basis. Instead, interbank lending migrated to the repo market, where lending is secured against collateral. The NY Fed’s repo and reverse repo facilities have become important tools for managing the excess liquidity in the system and the rates on these facilities are often adjusted alongside the Fed’s main policy rate. The repo (RP) facility allows the Fed to lend to cash-seeking market participants against Treasury collateral, setting an upper-bound on interest rates. The reverse repo facility (RRP) is the opposite, where the Fed lends Treasury collateral to market participants with excess cash. The RRP facility serves as a temporary drain of reserves from the system and sets a lower-bound on interest rates. 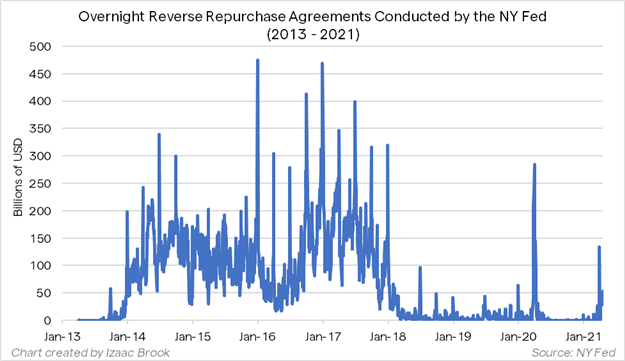 During 2014 to 2018, the pre-Covid peak of the Federal Reserve’s balance sheet, the RRP facility saw huge uptake at quarter-end periods as excess cash was drained from elsewhere in the financial system, preventing rates from below the FOMC’s lower-end target. With bank reserves at new record highs in the post-Covid environment, one should expect to see similarly-large usage of the RRP facility at future quarter-ends. The NY Fed raised the counterparty limit for the facility at the March 2021 FOMC meeting in preparation of future usage.

Communication, transparency, and the setting of expectations has been a continually-evolving piece of central bank policy. Transparency on policy helps the central bank remain both predictable and credible, valuable standards to maintain for an institution with such power over the financial system. The FOMC began to use forward guidance in the aftermath of the financial crisis, communicating that rates would be held at zero “for some time.” As the recovery continued, forward guidance language evolved to a dates-based approach and then an outcomes-based approach. Both approaches help to set expectations for policy over the longer-term and have proved useful for central banks around the world.

Central banks have turned to forward guidance again in the Covid crisis, providing markets with clear communications of rate outlooks, tapering expectations, and asset purchase program paths. For its part, the Federal Reserve has continued to stick to guidance consistent with their new framework despite strong economic data and market worries of inflation. FOMC members have affirmed that tapering and rate hikes will not come until substantial progress is seen towards the Fed’s goals.

Central bank policy has evolved a great deal over the past two decades. While the data that central banks track in order to formulate policy has not changed much, the way that policy is implemented has evolved a great deal. The development of secular trends following the financial crisis has also created the need for new innovations in policy. Central banks now control rates and monetary policy more generally through the management of liquidity, through large-scale asset purchases, through technical tweaks to money markets, and through enhanced communication. Understanding how these components interlock and weigh on each other and their impact for overall financial markets is valuable knowledge for any trader.