The US Dollar paused its descent against ASEAN currencies last week such as the Singapore Dollar, Thai Baht, Indonesian Rupiah and Philippine Peso. This meant it stabilized following persistent losses since early October. Taking a look at the chart below, the US Dollar’s consolidation was associated with a stabilization of ASEAN stock market indices.

Emerging Market indices turned higher around the time the S&P 500 bottomed in early October, underscoring their sensitivity to general risk appetite. This fundamental dynamic also tends to extend into ASEAN currencies, which can be quite sensitive to capital flows coming in and out of Emerging Markets. As such, this will likely continue being the focus for the USD against developing market currencies ahead.

This past week, inflationary concerns were back at the forefront of investors’ concerns. The 10-year Treasury breakeven rate hit its highest since 2005, reflecting rising future inflation expectations. This was also associated with more hawkish Federal Reserve monetary policy expectations. To see this, look no further than the front-end 2-year Treasury yield, which touched a new high this year so far.

As the central bank is expected to begin tapering next month, the downward pressure that has been keeping front-end rates near zero will likely lift. This causes the return on risk-free rates to rise, offering more competition to riskier assets, which tend to be situated in Emerging Markets. This, plus a rising US Dollar, may also make developing market debt repayments more difficult.

As such, all eyes are on US GDP and core PCE data this week. Growth in the world’s largest economy is expected to materially slow in the third quarter. The q/q estimate is at 2.8% versus 6.7% in Q2. Then on Friday, the central bank’s preferred gauge of inflation is anticipated to clock in at 3.7% y/y in September versus 3.6% prior. A combination of slowing growth and high inflation risks destabilizing the economy.

A wildcard might come from earnings season. Ahead, all eyes are on key tech companies such as Amazon, Apple and Facebook. Dismal results from Snap Inc. and Intel pressured tech stocks last week. While the Nasdaq 100 still finished last week’s session higher, it trimmed losses on Friday. Similarly soft earnings ahead could produce risk aversion, sending USD/SGD, USD/THB, USD/PHP and USD/IDR higher on average.

Check out the DailyFX Economic Calendar for ASEAN and global data updates!

With that in mind, the focus for ASEAN currencies may remain on external risks in the week ahead. Data such as Singapore CPI and industrial production, and Thailand trade figures may be brushed aside. The correlation between a custom ASEAN-based US Dollar index and the MSCI Emerging Markets index remains deeply negative, see chart below.

On October 22nd, the 20-day rolling correlation coefficient between my ASEAN-based US Dollar index and the MSCI Emerging Markets Index changed to -0.94 from -0.74 one week ago. Values closer to –1 indicate an increasingly inverse relationship, though it is important to recognize that correlation does not imply causation. 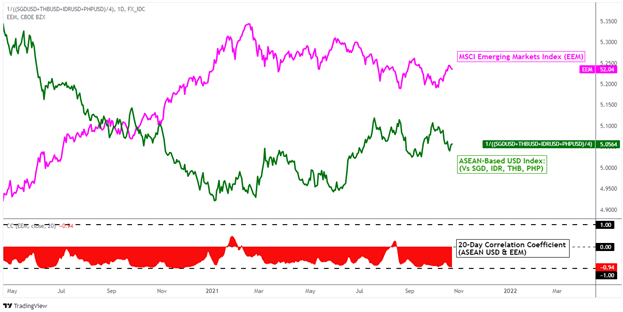