The Canadian Dollar has outperformed its Australian cousin of late, as energy markets added more value than metals. Markets calmed down going into month and quarter end after recent large moves across many asset classes. The US Dollar pulled back from recent highs as Treasury yields consolidated.

Late in the US session, USD/JPY made post-pandemic highs at 112.05 and held higher ground through the Asian day. The new LDP leader Fumio Kashida is seen as supportive of the very loose policy currently being deployed by the Bank of Japan. Japanese equities and Japanese government bonds steadied through the day.

A central bank chorus erupted in the last 24 hours, with the leaders of the ECB, BoE, Federal Reserve and BoJ re-iterating that inflation is transitory.

September Chinese manufacturing PMI came in at 49.6 against expectations of 50.0 and non-manufacturing PMI printed at 53.2, above the forecasted 49.8. The impact of more expensive energy appears to be impacting business activity.

The PBOC added liquidity again today and Chinese equity markets were mixed with most mainland indices up. Hong Kong’s Hang Seng index went negative, largely due to concerns around Evergrande continuing to miss coupon payments on their debt.

Iron ore prices traded over 10% higher in Asia ahead of a series of holidays in China. The Australian Dollar and the S&P ASX 200 were supported throughout the day. Crude oil consolidated at levels below their recent highs to underpin the Canadian Dollar.

Looking ahead, it is a busy session, with US GDP, US initial jobless claims and US PCE data, as well as other second tier releases.

The AUD/CAD made a high in early September and has traded lower in a descending channel since. This move has seen the 21-day simple moving average (SMA) roll over (go from positive to negative gradient). The 55-day SMA also has a negative gradient that could be bearish. 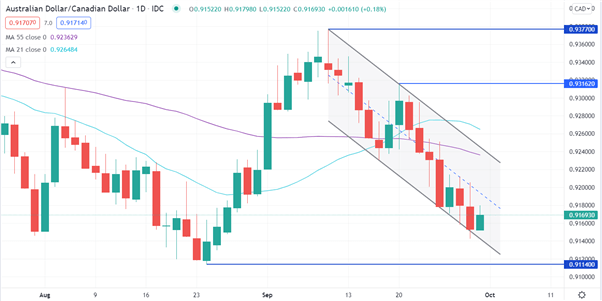