US jobs data on Friday disappointed markets and long end US Treasury yields went to their highest levels since June, with 10-years now at 1.61%. Other G-10 yields followed suit, except for Japan, putting more pressure on the Yen.

Bank of England Governor Andrew Bailey and fellow monetary policy committee member Michael Saunders both made hawkish remarks as they expressed concern about inflation running too high. Sterling rallied above 1.3670 on the comments.

Looking ahead, there are a number ECB members speaking today and Chicago Fed President Charles Evans is also expected to hit the wires.

USD/JPY has made a fresh high today as momentum indicators appear bullish for now.

The 21-day simple moving average (SMA) is well below the current level and the Bollinger Band based of it has widened as volatility increased with this break higher. The price has moved outside of the upper band and a move back inside might indicate a pause in bullish momentum.

For now though, all short, medium and long term SMAs have a positive gradient as represented by the 10-day, 21-day, 55-day and the 200-day SMAs. 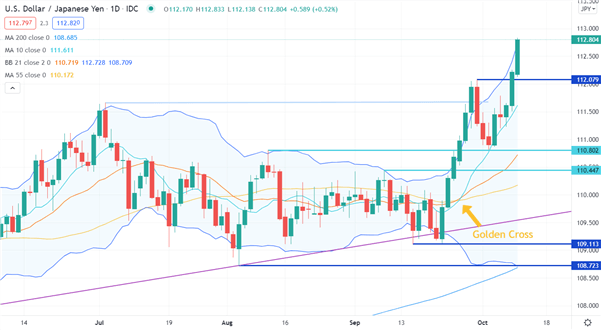