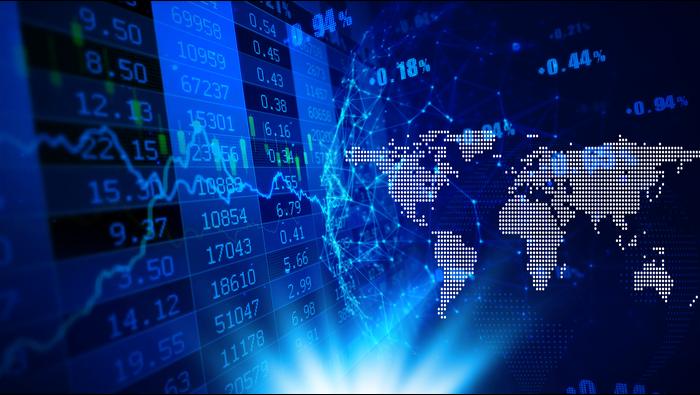 FOMC Talking Points:It’s a big day for global markets as we get the June rate decision from the FOMC. The bank was widely-expected to hike by 50 basi

It’s a big day for global markets as we get the June rate decision from the FOMC. The bank was widely-expected to hike by 50 basis points at today’s meeting as we came into this week but, interestingly, odds for a 75 basis point move today have heated up after a Monday article in the Wall Street Journal. This all took place while the Fed was in a blackout-period, meaning the members of the Committee were supposed to abstain from making public comments regarding monetary policy.

But, given the turmoil that showed after last Friday’s CPI report, perhaps someone at the Fed felt that a message needed to get out ahead of that rate decision?

After CPI came in at yet another fresh 40-year-high, equity markets took another large leg-lower to finish last week and then another to start this week. But, as rumors of a 75 basis point hike have trickled in, matters have seemed to calm.

There’s some that are saying a 75 basis point hike today would be better for stocks as it would signal a Fed that’s ready to get more serious with inflation. This pretty much flies in the face of conventional wisdom but, given how far behind the Fed is on inflation maybe there is something to that?

I can’t entirely dismiss this premise because we’re in rather unchartered ground here. Sure, some comparisons can be drawn to the stagflation environment of the late 70’s. But – that episode had a significantly lower debt-to-GDP ratio in the U.S. that could allow for higher rates. And perhaps more to the point, globalization has changed the way these domino effects will hit the rest of the world. And today, given how integrated global economies have become, it’s difficult to imagine the rest of the world remaining unscathed by surging US interest rates, especially as we’ve already seen European sovereign rates . So, there’s much to be considered here.

Nonetheless we will make our way through economic history together, and at DailyFX we have a plethora of items planned for today’s event. And tomorrow – we get the Bank of England rate decision in the morning and the Bank of Japan later on that night (Friday morning in Asia), so DailyFX.com will be busy with fresh content to keep traders updated of the happenings.

FOMC Ahead of the Rate Decision

At the bottom of the below graphic, you can see where those probabilities were one week and one moth ago and, amazingly, we were at a 91.8% probability for a 50 basis point hike today just a week ago – which is now showing a zero percent chance after this week’s change. 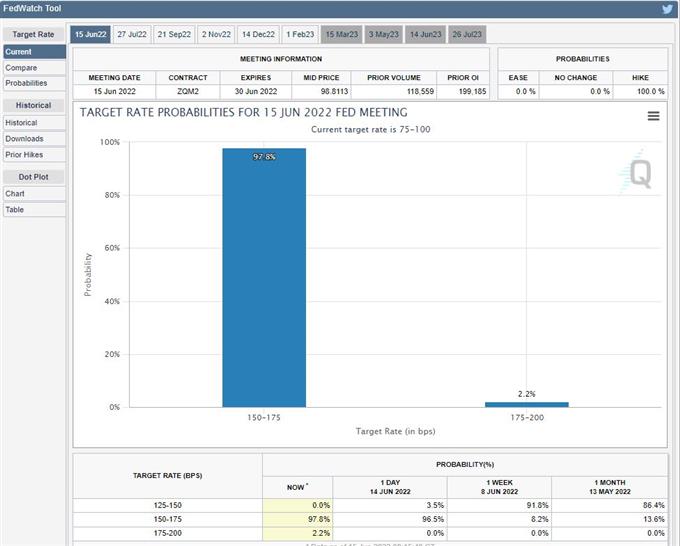 It was the equity sell-off late last week that really started to get attention. There was an ECB rate decision on Thursday that didn’t seem to work out too well, and given this morning’s emergency meeting at the bank, it seems that they already know that. Having an emergency meeting less than a week after a rate decision is rarely a positive sign. But, later in the Thursday session U.S. equities began to break down and, well, that continued all the way into yesterday’s trade.

The Friday morning CPI report seemed to really push bears over the ledge as another fresh high shows that the problem still isn’t under control. This is what’s motivating markets to expect a 75 basis point hike today.

The S&P 500 has so far held support just above the 3700 level. There’s a mass of resistance around prior support in the range from 3802-3830, and a breach above this level opens the door for a stretch move up towards this week’s opening gap, which I have plotted from around 3877 up to 3906. And beyond that, there isn’t much in the way until the 4k psychological level.

On the underside of price action – breakout strategies could remain as a workable way to approach the matter. Alternatively, a hold in the resistance zone taken from that 3802-3830 area could keep the door open, but traders would want to be cautious of topside breakouts up to the gap. 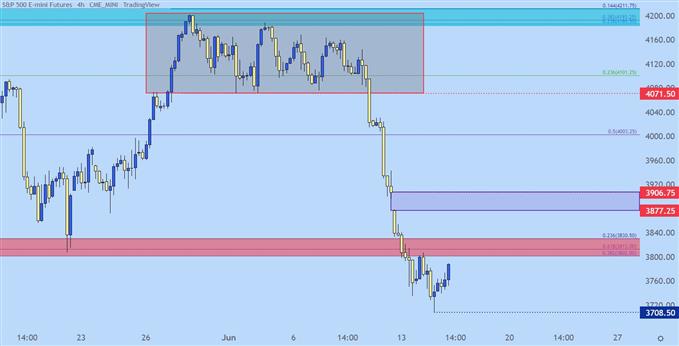 As I had looked at yesterday afternoon, the Nasdaq 100 has found support at a Fibonnaci level, taken from the 50% marker of the 2018-2021 major move.

Interestingly, that 2018 low came into play right as the Fed was capitulating from their last higher rate regime in December of that year. The following year, 2019, brought three rate cuts against the four hikes from the prior year and that made for a more vulnerable environment when Covid hit a couple months into 2020 trade.

The 50% retracement of that major move plots at 11,294, and it came into play later in Monday’s session, just as word of that WSJ report began to circulate. Support has since held through yesterday trade, and this exposes the weekly gap that’s plotted at 11,811-11,862. 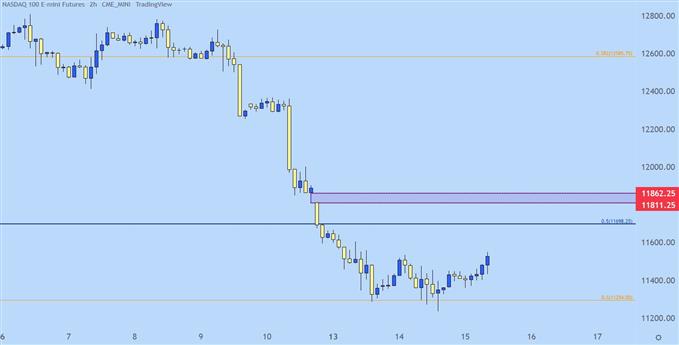 Taking a step back to the weekly chart highlights the bearish theme. A breach of that support opens the door for a steeper slide with my next targeted support beginning around the 10,750 area on the chart. The big question is whether the Fed fuels the fire today or whether this is something that comes into play later in the year.

Again, we’re in unchartered territory here regarding rate policy and given what’s happened in bond markets of recent, tensions are raised. So, caution will be continually warranted. 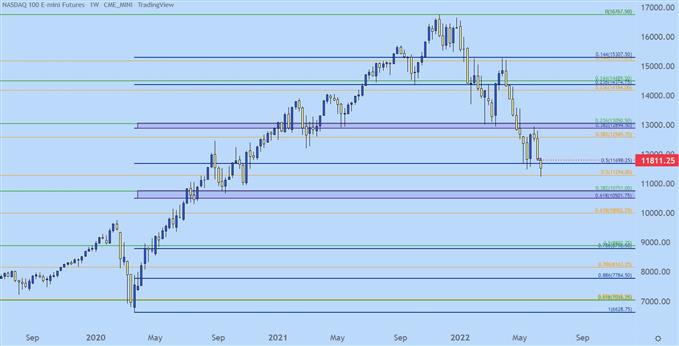 This will begin at 1:45 PM ET with our own Christopher Vecchio. The video player posted atop this page will go live once Christopher begins the live feed, and you can follow along directly from that. Or, if you’d like to create a notification for when this goes live, you can click on the lower left-hand portion of the box for ‘notify me.’