US Dollar Sinks as Powell Talks Tough on Inflation Ahead of CPI Data. Can USD Hold On?

The US Dollar is under the pump after Federal Reserve Chair Jerome Powell’s comments to the Senate Banking Committee overnight. He re-iterated much of what is already anticipated by the market.

That is, asset purchases will finish in March and rate hikes are expected to be lifting off at that time. Additionally, he said that the Fed may begin reducing the size of the balance sheet near the end of the year. The latter is conditional on the economy accelerating as they expect it to.

In response to a question invoking memories of former Fed Chair Paul Volker, Mr Powell said that rates could be lifted at a quicker pace if necessary. Back-end Treasury yields went lower as result, with the 10-year note now near 1.73%, down from 1.81% seen yesterday.

Two Fed Presidents, Raphael Bostic and Loretta Lester, backed the view that increases in rates should begin in March.

The weaker Dollar gave crude oil a boost with the WTI futures contract hitting USD 81.69 in Asia today. The oil centric Canadian Dollar hit a 7-week high as a result.

Kpler, a commodity and data analytics firm, revealed that by their calculations, China had taken 53% more oil from Iran and Venezuela in 2021 than in 2020. These 2 countries are under sanction by the US.

However, this is not surprising given that Chinese energy companies were directed by the CCP late last year to ensure that they could provide power to the country through the oncoming winter, at any cost.

The Euro was another beneficiary of a soft Dollar with EUR/USD moving to the top end its recent range.

The Australian Dollar held onto overnight gains after China CPI and PPI figures were below expectations.

APAC equities had a stellar day, following on the lead from Wall Street. Hong Kong’s Hang Seng Index (HSI) blistered over 2% higher, aided by tech names and a JP Morgan report that is bullish on Chinese gaming stocks.

Crucially, later today, the US CPI will be centre court with the market looking for an annual headline rate of 7% to the end of December and 5.4% for the core number, according to a Bloomberg survey.

It is currently testing the lower bound of that range, having moved below the 55-day simple moving average (SMA) and the most recent low of 95.570 in the US session.

Volatility has seen a small uptick on this move, as evidenced by the slight widening of the 21-day SMA based Bollinger Band.

An aggressive sell-off under 95.518 could see a volatility breakout, as it would potentially see the price move outside the Bollinger Bands. 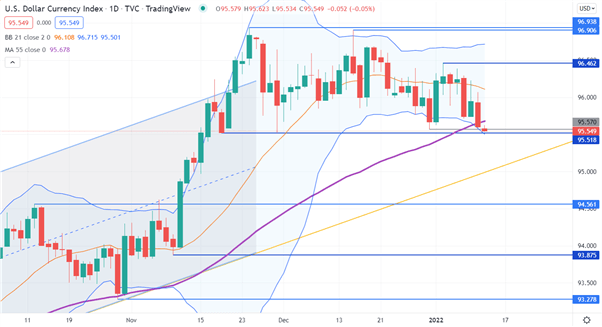