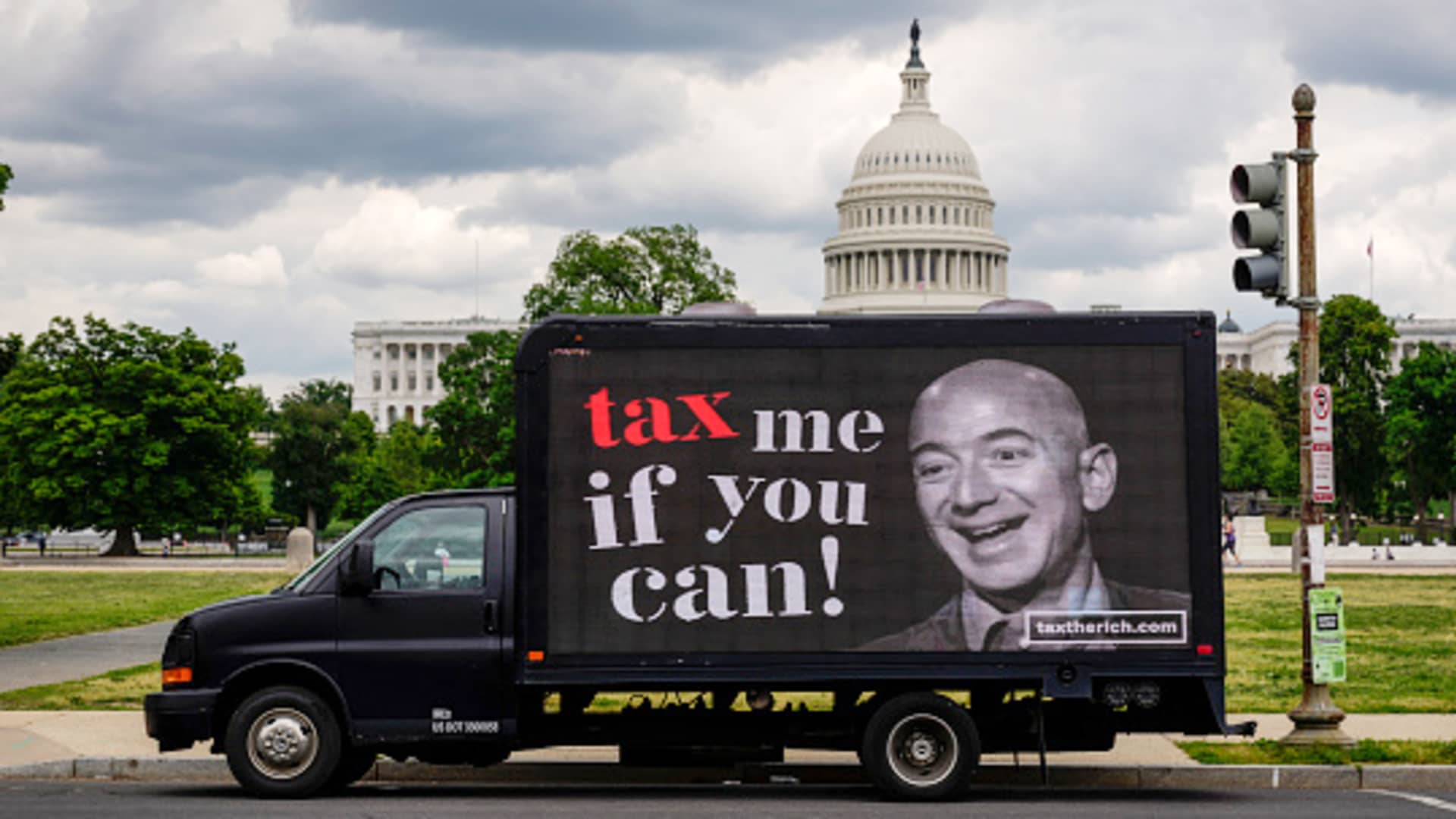 A mobile billboard calling for higher taxes on the ultra-wealthy depicts an image of billionaire businessman Jeff Bezos, near the U.S. Capitol on May

Blockchain Bites: ‘Bitcoin Billionaires’ and Shopping for a Coke With Crypto
How billionaires like Reid Hoffman and Laurene Powell Jobs are serving to Joe Biden attempt to shut Trump’s digital marketing campaign lead
Billionaires are backing Bitcoin over gold … but some say Ethereum is even better

A mobile billboard calling for higher taxes on the ultra-wealthy depicts an image of billionaire businessman Jeff Bezos, near the U.S. Capitol on May 17, 2021 in Washington, DC.

A new billionaire was created on average about every 30 hours during the Covid-19 pandemic, according to a new report by Oxfam, the global charity focused on eliminating poverty.

Now, 573 more people around the world can claim billionaire status compared to 2020 when the pandemic began, for a current total of 2,668 billionaires.

Yet 263 million people are at risk of falling into extreme poverty this year, signaling deepening wealth inequality exacerbated by the pandemic.

The widening divide between the haves and have-nots highlights the need for more taxes on the wealthiest, according to Oxfam.

“We really need for Congress to step in and for the administration to step in and tax the most wealthy in our society so that we can really start to invest in public services and in working people,” said Irit Tamir, director of the private sector department at Oxfam America.

The report comes as business leaders, politicians and billionaires meet face-to-face this week in Davos, Switzerland, for the first time in two years.

Political leaders on Capitol Hill, including President Joe Biden, have put forward their own proposals to make the wealthy pay more.

“Right now, the average billionaire — there are about 790 of them or so in America — has a federal tax rate of 8%,” Biden tweeted on Sunday.

“No billionaire should be paying a lower tax rate than a teacher, a firefighter, an electrician or a police officer,” he said.

There are two main ways policymakers can “tax the rich,” according to Howard Gleckman, senior fellow at the Urban-Brookings Tax Policy Center: taxing the income or taxing the wealth of rich people.

“Generally, what we do in the U.S. is we tax income,” Gleckman said. “We don’t really tax wealth.”

That could change, based on some proposals that have been put forward. One key idea that has received attention is taxing unrealized capital gains, or the value of assets that have not yet been sold.

This may be tricky with privately held businesses, particularly when it comes to determining a value both the IRS and owners can agree on. Consequently, one idea from Sen. Ron Wyden, D-Ore., calls for applying this tax annually to just publicly traded assets. Other non-traded assets would instead be taxed when they are sold.

This approach could become complicated for taxpayers if the value of their assets declines, and they have to reconcile the taxes they have already paid.

Another approach would be to get rid of a mechanism that allows people to avoid paying taxes on the increases in the value of assets over their lifetimes, formally known as a step-up in basis at death.

For example, suppose you buy a stock for $10, and then it is worth $100 when you die. When your heirs receive the stock, their basis will be $100, based on current rules. Consequently, they will not be taxed on the $90 increase in value that happened during your lifetime.

That could be changed so that heirs will owe taxes on any gains since the original cost basis, or the $10 at which you originally purchased the stock.

However, one key disadvantage to this change is it would take a long time for the government to raise revenue, since it requires the stock owner to die and for their heir to sell it. “That can take decades,” Gleckman said.

With any of the proposals, the government will have to strike a balance between generating money and trying to limit the administrative challenges any implemented changes require.

Most Americans will never have to worry about paying these taxes, even if they have $5 million or $10 million in assets.

“This is really for people with extreme wealth,” Gleckman said.