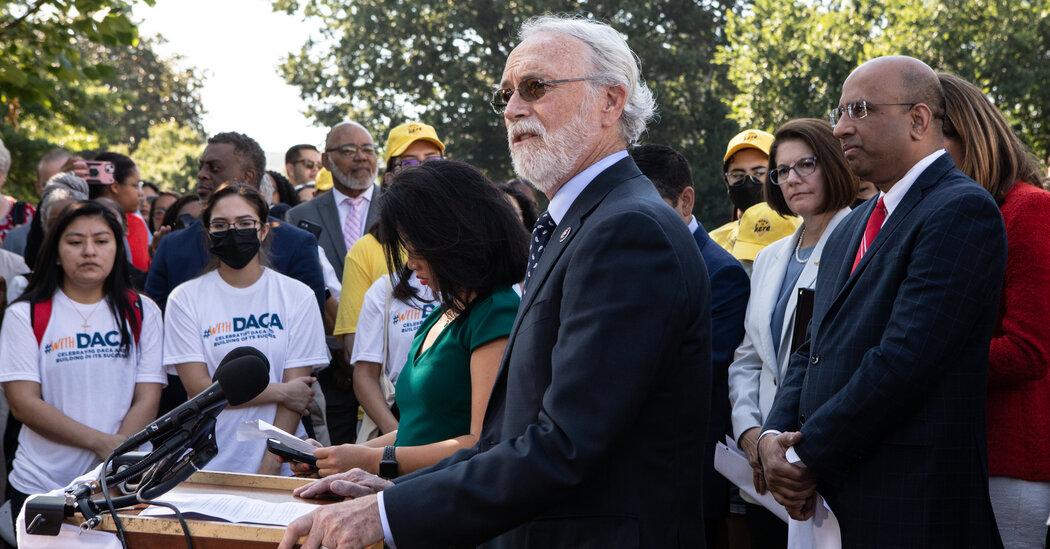 Representative Dan Newhouse of Washington, one of 10 House Republicans who voted to impeach President Donald J. Trump for inciting the Jan. 6 Capitol

Representative Dan Newhouse of Washington, one of 10 House Republicans who voted to impeach President Donald J. Trump for inciting the Jan. 6 Capitol attack, will advance to the November general election to seek a fifth term after finishing in the top two in a crowded primary, according to The Associated Press. He will face Doug White, a Democratic businessman, who narrowly trailed him as of Friday night.

Under Washington election laws, the top two candidates in the primary, regardless of party, advance to the general election. The race in Washington’s Fourth Congressional District featured seven Republicans, including Mr. Newhouse, and one Democrat, Mr. White.

Mr. Newhouse, 66, drew the ire of Mr. Trump and local Republicans after supporting his second impeachment.

A hops and alfalfa farmer, Mr. Newhouse had been vice chairman of Mr. Trump’s 2020 re-election campaign in Washington State. But after the impeachment vote, six Republican county chairmen in his district called on him to resign.

Mr. Newhouse — who, like his father, served as a state legislator — resisted those demands, saying he remained a conservative Republican and urging the party instead to focus on holding the Biden administration accountable.

He was supported by the Defending Main Street super PAC, which ran an advertising campaign worth about a half-million dollars, according to AdImpact, an advertisement tracking firm.

The super PAC’s most-watched TV spot attacked Mr. Newhouse’s Trump-endorsed challenger, Loren Culp, over an unpaid corporate tax bill and accused him of “padding his own pockets” with campaign donations.

Mr. Culp, a former police chief of Republic, Wash., made disputing Mr. Trump’s defeat in 2020 one of his top campaign issues, and also pledged to dissolve the Education Department and fight vaccine mandates. He was the Republican nominee in the 2020 governor’s race, a contest he never conceded despite losing to Gov. Jay Inslee by more than 13 percentage points.

Mr. Culp had raised just $310,700 as of July 13, according to campaign finance reports. That was a fraction of the $1.6 million collected by Mr. Newhouse and also trailed another Republican, Jerrod Sessler, who raised $508,900.

Mr. Sessler, a Navy veteran and former NASCAR driver, invested more than $350,000 of his own money in the race. He has said he attended Mr. Trump’s “Stop the Steal” rally on Jan. 6 and marched to the Capitol with thousands of other supporters, but didn’t enter the building.

“I’m running because our rights, right now, for the people alive today in America, are being stolen,” Mr. Sessler told The Spokesman-Review. “Literally. I think the 2020 election was the biggest heist in world history.”

Mr. White, who raised $390,700, has described himself as a moderate politician who was motivated to seek federal office after the Capitol riot. Running in the heavily Republican district, Mr. White didn’t mention his party affiliation in his lone TV spot, which he used instead to promote a platform that included reducing costs, reforming immigration and “making our communities safer.”