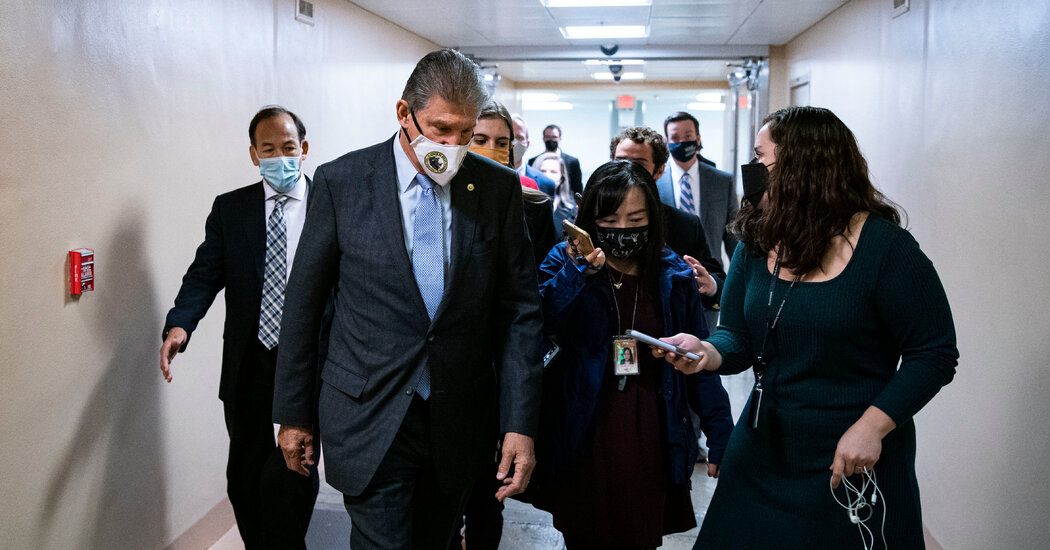 WASHINGTON — As they hunt for revenue to pay for their sprawling spending bill and try to unite a fractured caucus, Democrats are attempting to rew


WASHINGTON — As they hunt for revenue to pay for their sprawling spending bill and try to unite a fractured caucus, Democrats are attempting to rewrite the United States tax code in a matter of days, proposing the kind of sweeping changes to how America taxes businesses and individuals that would normally take months or years to enact.

The effort has effectively discarded trillions of dollars of carefully crafted tax increases that President Biden proposed on the campaign trail and that top Democrats have rolled out in Congress. Instead, lawmakers are throwing a slew of new proposals into the mix, including a tax on billionaires, hoping that they can pass muster both legally and within their own party.

The frantic attempt to overhaul the complex U.S. tax code remained in a state of flux on Wednesday, with Senator Joe Manchin III and some House Democrats expressing reservations about a tax on billionaires that was proposed earlier in the day by Senator Ron Wyden of Oregon. On Tuesday, Mr. Manchin shot down a plan that would have given the Internal Revenue Service more visibility into certain taxpayers’ bank accounts in order to catch tax cheats, forcing a group of Senate Democrats who support the provision to try to negotiate a compromise. Mr. Manchin’s opposition to a new federal paid leave program also appeared to doom its chances of being included in the final legislation, although supporters of the provision said they would fight to keep it intact.

Senator Mark Warner, a Virginia Democrat, acknowledged on Wednesday that the rapid pace of the legislative process posed risks and said it would be preferable to “allow some of this very, very complicated tax policy to get an appropriate airing back and forth.”

The need to roll out new tax proposals stems largely from the concerns of business groups — and moderate Democrats — who effectively killed Mr. Biden’s initial plan to raise the corporate tax rate to 28 percent from 21 percent to pay for his clean energy and social policy initiatives. Other ideas proposed by the White House, including raising the top marginal rate for the wealthiest taxpayers and doubling the capital gains tax, have also been jettisoned.

The new policy proposals include elements of the kind of wealth tax that Mr. Biden shied away from during his campaign in favor of other tax increases. Under the new plan, billionaires, who often pay little to nothing in federal income taxes, would have to pay taxes on the increased value of certain liquid assets, like stocks and bonds, even if those assets were not sold and the gains were not realized. A second proposal, which Mr. Biden has supported in the past, would impose a 15 percent tax on companies that report at least $1 billion in profits to shareholders but have little or no federal tax liability as a result of tax deductions and other loopholes.

If enacted, the taxes would likely apply to fewer than 1,000 companies and individuals. But the breakneck speed at which changes are being considered and crafted is rattling business groups and some powerful Democrats, who have expressed concern about the consequences of moving so quickly.

“We’re quite concerned that Congress is contemplating really fundamental shifts in tax policy with very little time for any vetting for unintended impact and consequences,” said Neil Bradley, chief policy officer at the U.S. Chamber of Commerce, a top business lobbying group. “I don’t think anyone fully understands the implications of what’s being proposed.”

The American Council on Renewable Energy warned that the new 15 percent corporate minimum tax could actually undermine some existing clean energy incentives because companies would no longer get deductions for wear and tear on their properties, increasing their tax bills. The council urged lawmakers to change the bill to ensure that depreciation benefits associated with renewable energy projects are protected.

“The predictable result will be increased costs and slower renewable energy deployment that works at direct cross-purposes with Congress’s decarbonization goal for the power sector,” the group said in a statement.

Democrats have been rushing to reach agreement on what to include in their social safety net and climate change bill — and how to pay for it — before Mr. Biden leaves on Thursday for Europe, including a climate conference in Scotland. Progressive Democrats have insisted that the framework of the bill be finalized before they will vote for a $1 trillion infrastructure bill that is also central to Mr. Biden’s economic agenda. Democrats have said they want both bills passed before the end of the year.

While there is broad agreement on some of the spending, including funding for child care and clean energy projects, areas of disagreement remain and many programs have fallen out of the bill or been reduced.

The tax side has proved even more complicated given the demands of Mr. Manchin and Senator Kyrsten Sinema of Arizona, who have insisted that the legislation be paid for but have objected to several tax increases. With Democrats holding a razor-thin majority in the Senate, they cannot afford to lose a single vote, forcing them to find ways to raise revenue that pass muster with Mr. Manchin and Ms. Sinema.

The scramble by Democrats to craft such sweeping legislation on the fly is reminiscent of the 2017 tax overhaul, when Republicans were also under pressure to pass legislation by year’s end. At the time, Democrats such as Mr. Wyden, who is now the chairman of the Senate Finance Committee, assailed Republicans for “rushing ahead to pass this bill without knowing its full cost.”

“It’s really striking to me that the same Democrats who derided Republicans for supposedly rushing a partisan tax cut in 2017 are now teeing up massive tax hikes on a party-line vote, including an unvetted and likely unconstitutional wealth tax, on the sole argument that failure is not an option,” said Brian McGuire, the former chief of staff for Senator Mitch McConnell, the Republican leader.

The spine of the tax code went largely unchanged for three decades after President Ronald Reagan signed a bipartisan bill in 1986 that reduced many tax rates but also closed off several avenues that people and corporations had for reducing their tax bills.

In 2017, Republicans ushered in a series of tax cuts and essentially built a new system for taxing the profits that multinational companies earn abroad, in hopes of making it more lucrative for companies to invest in the United States. They created that system quickly — less than two months passed from the release of the first draft of the bill and President Donald J. Trump signing the final version into law — but Republican lawmakers had been laying the groundwork for the change for years, including releasing a detailed tax framework led by former Representative Dave Camp of Michigan.

Still, Democrats criticized Republicans for rushing the bill and not holding hearings on many key provisions. Some parts of the overhaul were barely mentioned in the run-up to the vote, like the creation of so-called opportunity zones that give tax advantages to people who invest in projects in underserved areas.

The final bill included several drafting errors, like the so-called grain glitch that hit farmers. It also left enormous leeway in implementing some parts of the law to the Treasury Department, which in some cases weakened provisions to reduce potential tax bills for companies.

Democrats took pains this year to say they would be different. Mr. Biden proposed trillions of dollars in tax increases on businesses and high earners in the 2020 campaign, and his Treasury Department fleshed them out further in its “green book” this spring listing potential tax changes the administration supports.

Tax experts warned this week that embarking on a slate of untested ideas could create new problems. Some predicted that billionaires could shift their assets to sectors such as real estate that would not face the annual levy, potentially depressing share prices for other investors. Others suggested that companies could alter how they report their earnings to shareholders to escape the new tax on book income.

In the case of the tax on billionaires, Democrats could be opening themselves up to a thicket of legal challenges akin to what ensued after the passage of the Affordable Care Act in 2010. The tax has elements that would likely be ripe for well funded lawsuits. The Constitution says that “direct taxes,” which are not clearly defined, must be apportioned among the states so that each state’s residents pay a share equal to the share of the state’s population.

The proposal would levy a tax on anyone with more than $1 billion in assets or more than $100 million in income for three consecutive years — about 700 people in the United States. Initially, the legislation would impose the long-term capital gains tax — 23.8 percent — on the gain in value of billionaires’ tradable assets, such as stocks, bonds and cash, based on their original price. Lawmakers have been careful not to characterize the policy as a wealth tax, but the fact that it has a threshold based on wealth could be problematic.

Treasury Secretary Janet L. Yellen said in an interview on CNN on Sunday that the tax would “help get at capital gains, which are an extraordinarily large part of the incomes of the wealthiest individuals.” However, Ms. Yellen earlier this year expressed doubts about the feasibility of implementing a wealth tax and senior officials at Treasury, including Natasha Sarin and Rebecca Kysar, have previously written about the constitutional and revenue-raising issues that it could face.

Daniel Hemel, a left-leaning tax law professor a the University of Chicago mused on Twitter that Democrats would be better off simply raising tax rates and closing estate tax loopholes.

“Why do the one thing for which constitutionality actually isn’t super-clear?” he said.