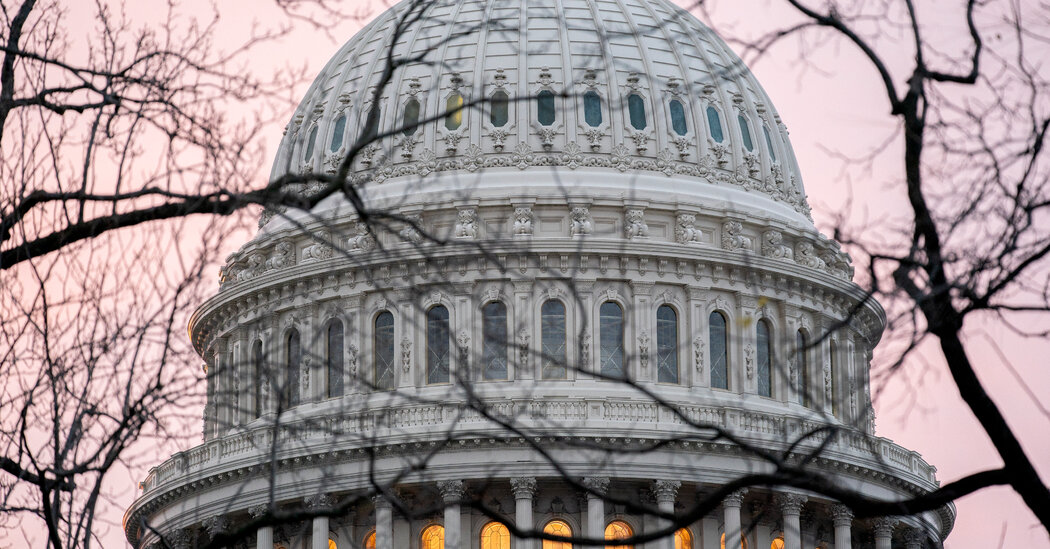 WASHINGTON — Top lawmakers announced a deal on Thursday to keep the government funded through mid-February, but a group of Senate Republicans was s


WASHINGTON — Top lawmakers announced a deal on Thursday to keep the government funded through mid-February, but a group of Senate Republicans was still threatening to force a shutdown over the Biden administration’s vaccine mandate for large employers.

With less than 48 hours before funding is set to lapse, the House was expected to vote later Thursday to keep the government open through Feb. 18 and provide $7 billion for the care and resettlement of Afghan refugees. But the fate of the measure was uncertain in the Senate, where unanimity would be needed to expedite its passage before a midnight deadline on Friday, and a few Republicans signaled they would object.

Leaders in both parties have warned against a government shutdown, and some Republicans said they were optimistic that they could unite their ranks behind the legislation in time to avert a lapse in funding.

“Let’s be clear, if there is a shutdown, it will be a Republican, anti-vaccine shutdown,” said Senator Chuck Schumer of New York, the majority leader. He added, “I hope cooler heads will prevail on the other side, so we can keep the government funded before tomorrow’s deadline.”

Senior Democrats and Republicans hailed the spending agreement, saying it would afford them more time to resolve outstanding disputes and approve longer-term legislation to fund the government next year.

“It continues current funding and policy with only minimal changes, creating incentives for both sides to negotiate,” said Representative Rosa DeLauro of Connecticut, the chairwoman of the Appropriations Committee. “While I wish the Feb. 18 end date were earlier, this agreement allows the appropriations process to move forward toward a final funding agreement which addresses the needs of the American people.”

While lawmakers have long conceded that they needed more time to negotiate the dozen bills needed to keep the government funded for the entire fiscal year, the stopgap plan has become snarled in partisan disagreements over how long it should last and what additional funding proposals could be attached.

Because the short-term legislation maintains existing funding levels, it will effectively codify spending levels negotiated with the Trump administration through mid-February. Democrats had pushed to do so only through late January, eager to enact their own funding levels and priorities while in control of the White House and both chambers of Congress.

Democrats also dropped a push to avert billions of dollars in looming cuts to Medicare, subsidies and other programs, over objections from Republicans.

Biden’s winter Covid plan. As Omicron reaches the U.S., President Biden will announce a strategy that is expected to includes insurance reimbursement for at-home coronavirus tests, and that international travelers must show proof of a negative test taken the day before departing for the U.S.

Travel restrictions and lockdowns. As more Omicron cases emerge globally, countries are responding in varied ways. Japan joined Israel and Morocco in barring all foreign travelers, and Australia delayed reopening its borders for two weeks. The C.D.C plans to increase testing and screening of international fliers to the U.S.

A patchwork of regulations. As the new Omicron variant spread around the world, two KLM flights from South Africa became emblematic of the scattershot and lax global approach to coronavirus containment. Of the more than 60 people who tested positive for the virus, at least 14 had Omicron.

A new type of treatment. An expert panel voted to recommend that the F.D.A. authorize a Covid pill from Merck for high-risk adults, the first in a new class of antiviral drugs that could work against a wide range of variants, including Omicron. The pill could be authorized within days, and available by year’s end.

Vaccine hesitancy in Africa. The detection of the Omicron variant in Africa signals the next stage of the battle against Covid-19: getting more people inoculated in poorer nations. But though vaccine supplies are becoming sufficient, the new hurdle is overcoming local skepticism or outright hostility.

Senator Richard C. Shelby of Alabama, the top Republican on the Appropriations Committee, said in a statement that he was “pleased that we have finally reached an agreement.” But he warned that if Democrats continued to push for policies Republicans oppose — including elimination of the Hyde amendment, which blocks federal funding for abortions — and lower levels of defense funding, “we’ll be having the same conversation in February.”

It remained unclear, however, whether other members of Mr. Shelby’s party would allow the bill to advance in time to avoid a shutdown. A few Republicans, led by Senators Mike Lee of Utah and Roger Marshall of Kansas, have said they will oppose moving forward with it unless a measure is added barring funding to put in place the administration’s mandate for large businesses to require vaccinations or regular testing to stem the spread of the coronavirus.

Several senior Republicans who have objected to the mandates have warned that the dispute is not worth a government shutdown, particularly as the nation confronts a new coronavirus variant.

“I don’t think shutting down the government over this issue is going to get an outcome,” said Senator Mitch McConnell of Kentucky, the minority leader, speaking on Fox News. “It would only create chaos and uncertainty, so I don’t think that’s the best vehicle to get this job done.”

But it would take only one Republican senator lodging an objection to slow the bill’s passage and force a lapse in government funding.