The year started with a bang for the Australian Dollar as the currency put in a one-sided move on Monday, the first trading day of 2022. In the major pair of AUD/USD this happened at an opportune spot on the chart, right around the 50% retracement of the November-December sell-off which plotted right around the prior swing-low of .7290.

But, as I highlighted later during the Monday session, that move had stalled at an area of prior resistance, giving rise to the potential for higher-low support to set at this key spot on the chart, plotted around the .7200 handle. After a strong bounce yesterday buyers have continued to push today, and price action is fast nearing a re-test of the .7275 Fibonacci level.

At this point, that price appears vulnerable to bullish price action which can cast topside resistance targets towards the .7350 level, which is nearing confluence with the underside of the prior bear flag formation; or perhaps even the .7417-.7436 area which also carries confluent with this zone showing between two different Fibonacci levels.

Taking a step back highlights the importance of current resistance around .7275. A breach above that price can open the door to a bigger picture trend as there’s now been a month of higher-highs and higher-lows, even as the Fed took a somewhat hawkish turn at their December rate decision.

But, given the veracity of the prior bearish move, there’s still short-side potential, especially considering that the low printed at a major psychological level of .7000. Such a level can turn the trend for a while, but for it to constitute a full-on reversal would likely need some fundamental fodder to continue pulling in buyers above the .7300 handle; and this is what highlights that next area of resistance potential around the 61.8% Fibonacci retracement of that move, plotted at around .7340. 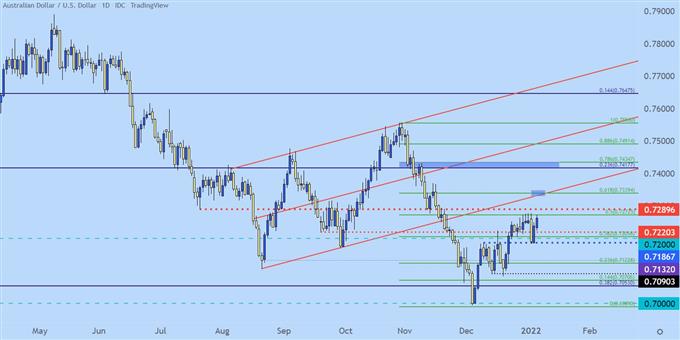 For traders looking at long scenarios around the Australian Dollar, AUD/JPY has proven to be a stronger mover of recent, and this can make for a more pronounced bullish case in the cross-pair. As I had highlighted a few weeks ago, the pair looked more attractive on the long side than the major of AUD/USD. The pair had just re-claimed ground above the 80 psychological level and, at the time, was testing a spot of confluent support on the chart around the 81.50 area.

Prices are now testing over the 84 handle after a strong bullish run. The complication at this point would be buying a high after a bullish trend that’s shown a minimum of pullback. And the ground above the 85 big figure presents some complication as buyers have failed to hold prices above that mark multiple times over the past year, including a very clear bullish scenario in Q1 of last year after an inverse head and shoulders pattern resolved in a very big way.

So, in a situation like this, pullbacks are often the more amenable path towards taking on long exposure, and there’s a couple of levels of interest for such an approach.

A prior swing-high turned support rests at 83.76, which is very nearby current price action and should be coupled with a show of support first. A bit deeper, around the 83.40 level resides a Fibonacci level of note. And below that we have a double bottom from around 82.85 which presents an ‘s3’ spot of potential support.