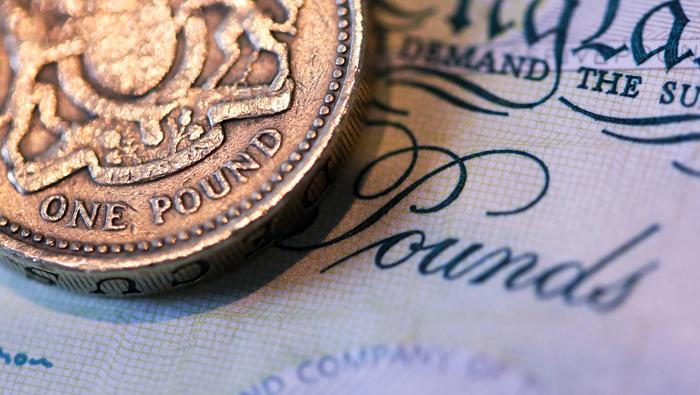 British Pound, GBP, GBP/USD, GBP/JPY Talking Points:It was less than a month ago that the beleaguered British Pound was limping into yet another r

It was less than a month ago that the beleaguered British Pound was limping into yet another rate decision from the Bank of England. A month prior, in early-November, there were even some expectations for a rate hike and GBP/USD was bristling with bullish potential, threatening to pose a topside breach of a bull flag formation that had been brewing for five months prior.

But when the bank didn’t hike at the Super Thursday rate decision, GBP fell out of bed and didn’t start to find its footing until a month later, right around another batch of rate decisions between both the BoE and the FOMC. After threatening to break above the bull flag in early-November, by mid-December GBP/USD was nearing invalidation of that formation, with support holding at a very key spot on the chart.

This was also around the time that some major support became to show up in both GBP/USD and GBP/JPY. The area around the 1.3167 price is confluent, as this is the 38.2% Fibonacci retracement of the 2020-2021 major move; and when this price traded on December 8th, it was confluent with the bottom side of that flag formation.

And then the Bank of England hiked rates in December, helping to bring some lift into the GBP, and that theme continued through the holidays with the British Pound showing as one of the strongest currencies in the world as markets began to build expectations for more hikes in the New Year. The pair is now trading above the 1.3500 psychological level and there appears to be the potential for brighter days ahead, with bull flag resistance sitting just a little higher on the chart. 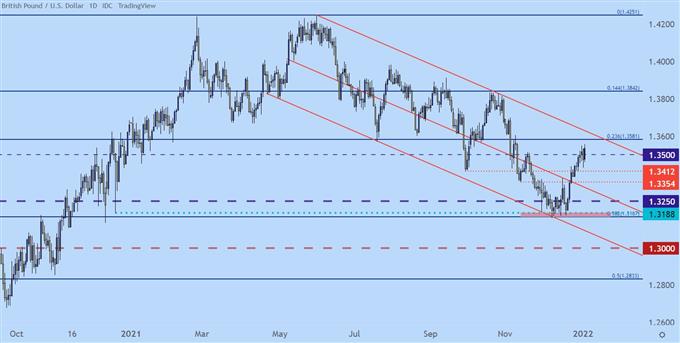 There could be greater bullish potential and judging by the four-hour chart below, there’s been little motive to shy away from the long side of the matter just yet. But – the 1.3500 level has some historical importance in GBP/USD and there’s still some resistance ahead, such as the 1.3581 Fibonacci level.

There’s another item of note in GBP/USD and that’s the potential for continued strength in the US Dollar, as well. With the two-sided nature of currency pairs, focusing one’s trade on a logical fundamental path can be helpful: And if looking to take advantage of a strong GBP on the back of higher rate themes would likely be more attractive if GBP is meshed against another currency that is not backed by the possibility of higher rates. I’ll look at such an option below the next chart. 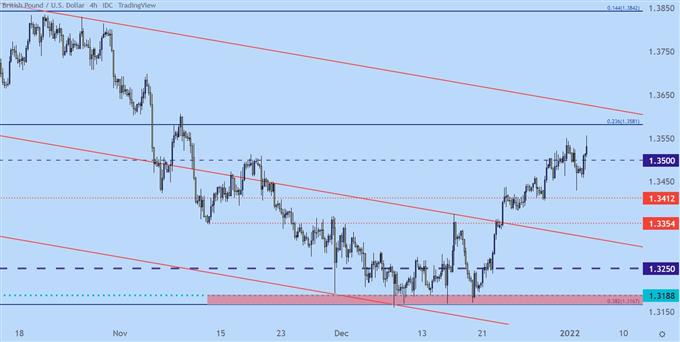 GBP/JPY Potential for Fundamental Drive to Contribute to Top Side

This was my Top Trade for Q4 of last year and the rationale remains the same: If GBP continues to gain on the back of higher rate expectations, GBP/JPY can be significantly more attractive than GBP/USD given the juxtaposition of USD/JPY, which is currently trading at a four-year-high as treasury yields continue to gain.

As I had shared on the Yen back in September, as the Fed was starting to open the door to higher rates in 2022, the Japanese Yen could be more attractive for weakness than the US Dollar or other currencies backed by hawkish expectations. The risk factor was a reappearance of risk aversion, such as around the still-ongoing Evergrande scenario.

And, as illustration of the difference between GBP/USD and GBP/JPY, GBP/JPY is currently 800 pips above the December low while GBP/USD is up a more paltry +300. 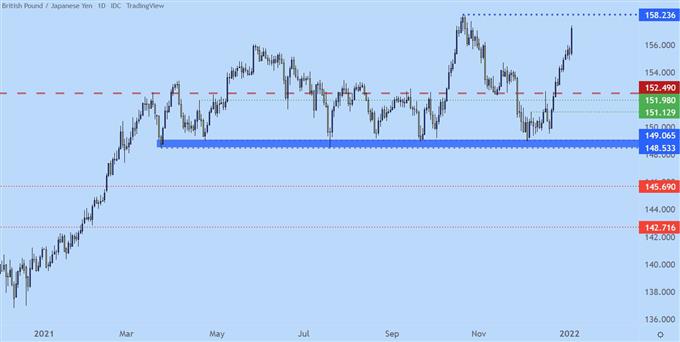 This setup seems to sync with the risk-on/off theme across markets and if we do, in fact, see higher rates taking hold this year then likely it’ll be amidst a backdrop of continued stability in stocks. This could continue to make the long side of GBP/JPY as attractive with higher rate bets in the UK coupled with no expectations of the same out of Japan.

Drawing back to the weekly chart helps to highlight the key nature of current levels. The price of 158.24 holds as the current five-year-high in the pair. Beyond that, the 50% marker of the 2015-2016 major move plots at 159.44. And above that is the psychological level of 160.00, which looms large but hasn’t been traded at since 2016, right around the time that Brexit was getting priced-in to the matter. If bulls can continue to press to trade beyond this thicket of resistance, there’s a lot of open space of this chart for prices to run-higher. The February Super Thursday rate decision at the Bank of England will be key for this theme, and continued hawkishness from the BoE can serve to propel price to fresh five or perhaps even six year highs. 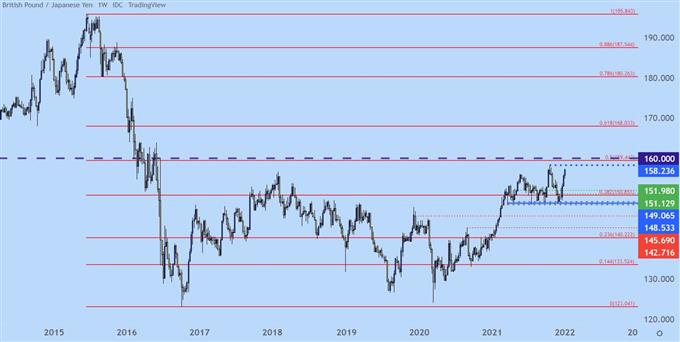