The DAX index has been caught up in a bout of negativity with concerns over Russian energy supplies and hawkish central banks undermining the German bourse.

The continuing exposure of Russian activity in Ukraine is leaning toward further sanctions against the former that have the potential to severely interrupt European energy.

It is a sea of red across most equity indices today. Markets were left reeling after comments from Federal Reserve Governor Lael Brainard overnight that left no doubt as to the seriousness of the Fed’s fight on inflation.

Governor Brainard had previously been considered one of the more dovish members of the Federal Open Market Committee (FOMC).

In her remarks she made it clear that the Fed would be reducing the size of its balance sheet at a faster pace than the market had been anticipating.

This pushed yields higher across the Treasury yield curve and most other debt markets. The benchmark US 10-year note is yielding above 2.60% for the first time in 3 years. Consequently, bonds joined equities lower in price.

Gold remains relatively steady near US$ 1921 an ounce while crude oil is also holding ground. The WTI futures contract is near US$ 102 bbl and the Brent contract is around US$ 107 bbl.

Iron ore continues its climb, trading above US$ 147 a metric tonne, a long way from the November lows of US$ 82. This is largely on the back of the perception that Chinese officials are easing up on their crackdowns on various sectors.

Currencies had a quiet Asian session with the Japanese Yen and Swiss Franc easing a touch, while the Aussie held onto yesterday’s post RBA gains.

Given the comments from Brainard, the Fed meeting minutes due later today will have more focus than usual. There will also be a couple of ECB and Fed speakers crossing the wires.

A break either side of this 2-week range might see momentum build in that direction.

The Double Top at 16295 is worth paying attention to should it be tested. 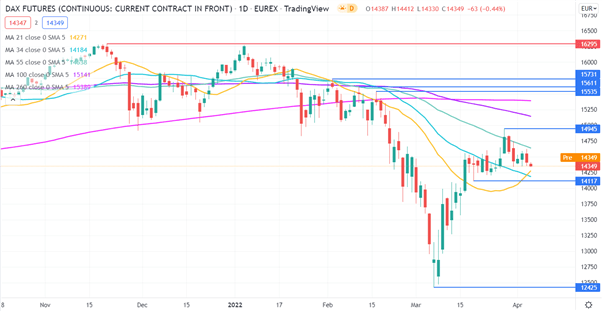