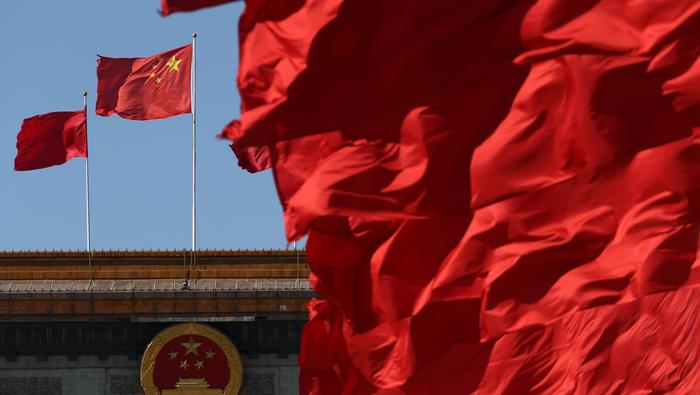 USD/CNH at Key Technical Level After US Dollar Drops

The Chinese Yuan gained versus the US Dollar overnight, with USD/CNH dropping to its lowest level since September 16 after a stronger-than-expected US inflation report. The consumer price index (CPI) print for September crossed the wires at 5.4% on a year-over-year basis. That matches the highest levels seen in over a decade. Longer-dated Treasury yields pulled back on the news, although the more rate-sensitive 2- and 5-year yields moved higher.

The Greenback fell despite the rise on the short end of the yield curve. The Federal Reserve’s September meeting minutes released early this morning showed that members are in favor of starting balance sheet growth tapering this year. Several members noted a more aggressive tapering cycle may be warranted. This, along with the higher inflation print, most likely locks in the coming taper cycle outside of an unforeseen economic shock.

Meanwhile, commodities are moving higher across steel and energy products. The softer US Dollar is helping underpin prices, although crude oil is seeing some relative weakness. Gold and copper made strong gains, rising around 2% and 4%, respectively. Uranium prices saw a second day of strong gains, and lumber futures gained over 5%.

The Australian Dollar will come under the spotlight today, with Australia’s September jobs report due to cross the wires at 00:30 GMT. Analysts expect to see a loss of 137.5k jobs, according to a Bloomberg survey. Traders may look past the data, however, given the country was still under widespread lockdowns during the recording month.

Chinese inflation data for September is due out later in the day at 01:30 GMT. The year-over-year figure is expected to drop at 0.9%, which would be a 0.1% gain from the August print. Factory gate prices will be released concurrently, with the producer price index (PPI) set to see a 10.5% y/y increase. That would be a significant rise from August when factory input prices rose at a 9.5% y/y rate.

The Yuan may look past a surprise relative to expecations, however, and instead focus on rising tensions with the United States. The US Trade Representative (USTR) is considering additional tariffs on Beijing. A public comment period was opened by the USTR over section 301 product exclusions for select goods from China. A series of tariffs were put in place against China in 2018 over Beijing’s practices being burdensome against US commerce.

USD/CNH broke below the support level of a Symmetrical Triangle, which has been in place since the May swing low. That was the lowest level since 2018 for the pair. MACD is accelerating to the downside, away from its signal line. The Relative Strength Index (RSI) is also moving lower. Downside momentum may pickup through today’s session given the technical break. 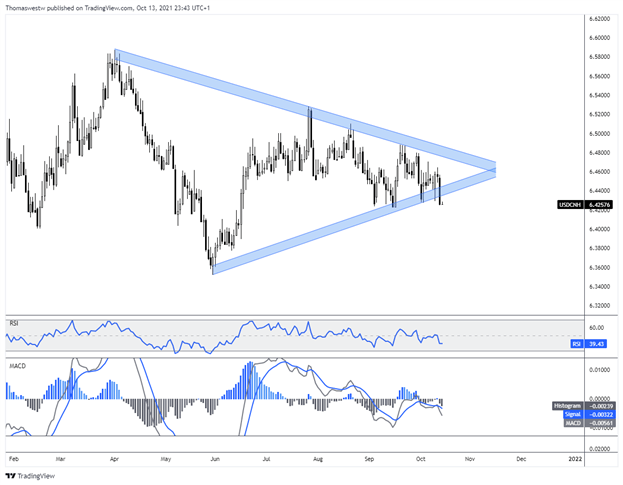