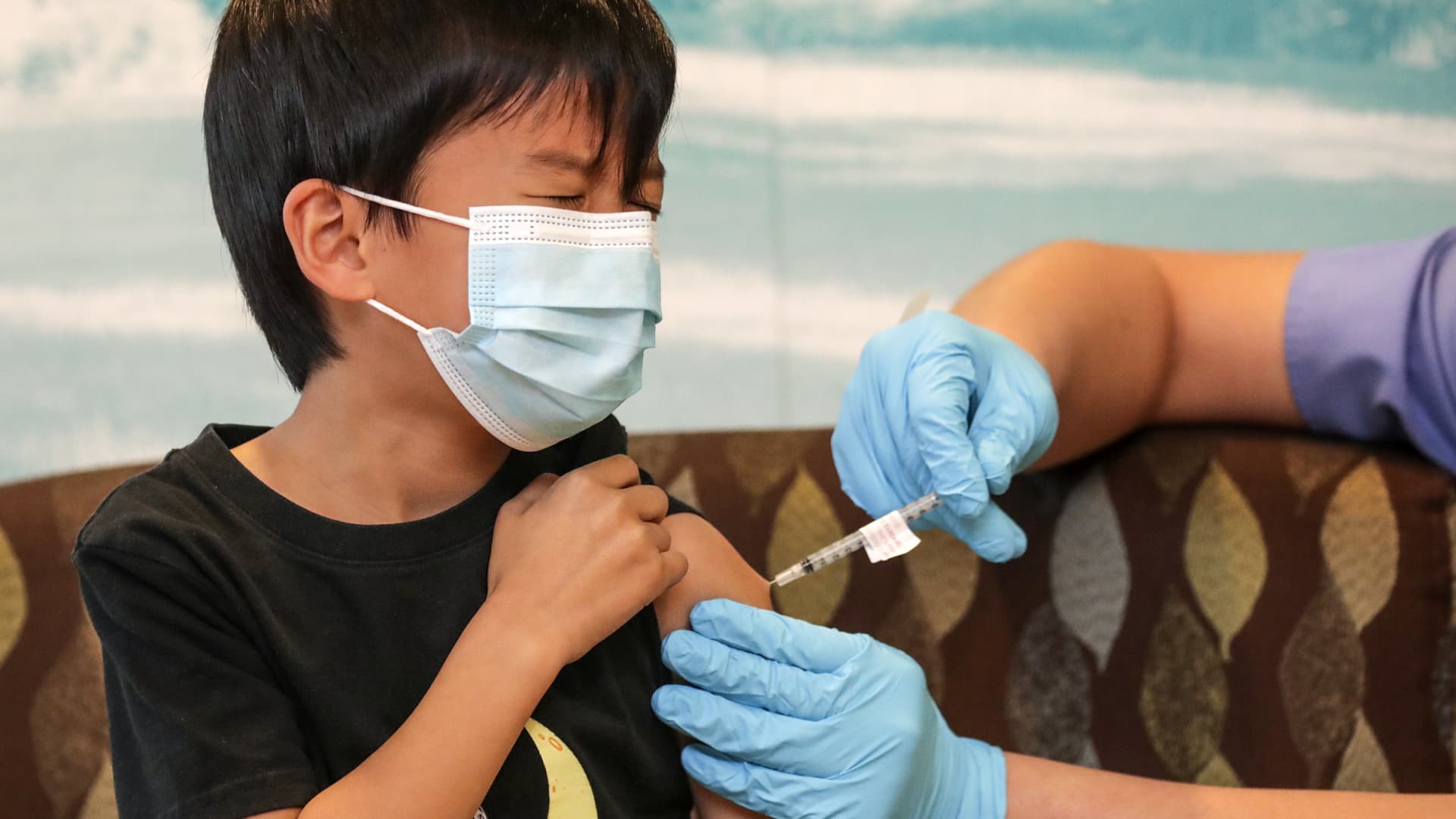 The Centers for Disease Control and Prevention on Thursday recommended a Pfizer Covid booster shot for children ages 5 to 11 at least five months after their primary vaccination series, as infections rise across the country and immunity from the first two doses wanes off.

The CDC’s panel of independent vaccine experts voted overwhelmingly in favor of boosters for kids in the age group after reviewing and discussing the data during a five-hour public meeting. CDC Director Dr. Rochelle Walensky signed off on the recommendation later in the evening, giving pharmacies, doctors’ offices, and other health-care providers the green light to start administering the shots.

The CDC is rolling out boosters for 5- to 11-year-olds even though most of the kids haven’t received their first two doses yet, with only 29% of the age group fully vaccinated. Walensky, in a statement Thursday, sought to reassure parents that the shots are safe and encouraged them to get their kids vaccinated.

“Vaccination with a primary series among this age group has lagged behind other age groups leaving them vulnerable to serious illness,” Walensky said. “I encourage parents to keep their children up to date with CDC’s COVID-19 vaccine recommendations.”

Though Covid is generally less severe in children than adults, more kids ages 5 to 11 have been hospitalized during the omicron wave than at any other point during the pandemic, according to CDC data. Since the start of the pandemic, more than 4.8 million kids in the age group have caught Covid and more than 15,000 have been hospitalized, according CDC data.

“The impact and severity of long haul Covid on kids is substantial, and while we might not see it in the medical care setting, it is absolutely affecting the lives of individuals who are impacted,” said Dr. Grace Lee, the committee chair and professor of pediatrics at Stanford University School of Medicine.

More than 8,000 children have developed MIS-C since the start the pandemic, with kids ages 5 to 11 most commonly affected at 46% of reported cases, according to CDC data. Sixteen children in the age group have died from MIS-C, 23% of the 68 total reported fatalities across kids of all ages.

Dr. Keipp Talbot, the sole vote against the recommendation, said the U.S. needs to focus its resources on vaccinating the overwhelming majority of kids in the age group who have not received their first round of shots, rather than moving forward with a booster shot.

“Very few have gotten the first two doses, and I think that’s incredibly important to focus on before we start boostering them,” said Talbott, an internist and infectious disease specialist at Vanderbilt University.

As cases increase, the immune protection provide by the vaccines against infection has waned off as more time has elapsed since people got their primary vaccination series. Omicron and its subvariants are also adept at evading the antibodies that block infection.

In the 5 to 11 age group, Covid vaccination was 43% effective against infection 59 days after the second dose during the period when omicron became the dominant Covid variant, according to CDC data. However, vaccination was 74% effective at preventing hospitalization in 5 to 11-year-olds against all virus variants.

Pfizer presented data from a small group of 30 children ages 5 to 11 showing that a third dose boosted infection-blocking antibody levels against omicron 22 fold one month after administration compared to two doses. Dr. Charu Sabharwal, Pfizer’s director of vaccine clinical research, said the increased antibody levels should confer real-world protection against the omicron variant, though the company did not present efficacy data during Thursday’s meeting.

Sabharwal said most reactions to the third dose among a broader group of 401 kids were mild to moderate, with fatigue and headache the most common. The rate of fevers was low with none of the kids reporting a temperature great than 104 degrees Fahrenheit, or 40 degrees Celsius. There were no cases of myocarditis or pericarditis, or inflammation of the heart. Ten kids had swollen lymph nodes, but the cases were mild and resolved within a week after onset, according to Pfizer’s data.

More than 18 million Pfizer doses have been administered to 5 to 11-year-olds in the U.S. since the two-dose vaccination series was authorized for the age group in November. The overwhelming majority of reactions to the vaccine, 97%, were not serious, according to CDC data. The most common side effects from the shots were fever, vomiting, headache, dizziness and fatigue.

Dr. Sara Oliver, a CDC official, said the rate of myocarditis in kids ages 5 to 11 would likely be even lower following a booster dose given that is the case with other age groups.

The CDC has verified 20 cases of myocarditis, an inflammation of the heart, in kids ages 5 to 11 as of April following Pfizer vaccination. The overwhelming majority of the myocarditis patients were boys, 17 were hospitalized and 1 died. The boy who died had no evidence of viral infection, developed a fever 12 days after dose 1 followed by stomach pain, vomiting and death on day 13.

The CDC, in a large study published in April, found that the risk of myocarditis is higher after Covid infection than vaccination with Pfizer and Moderna’s shots.