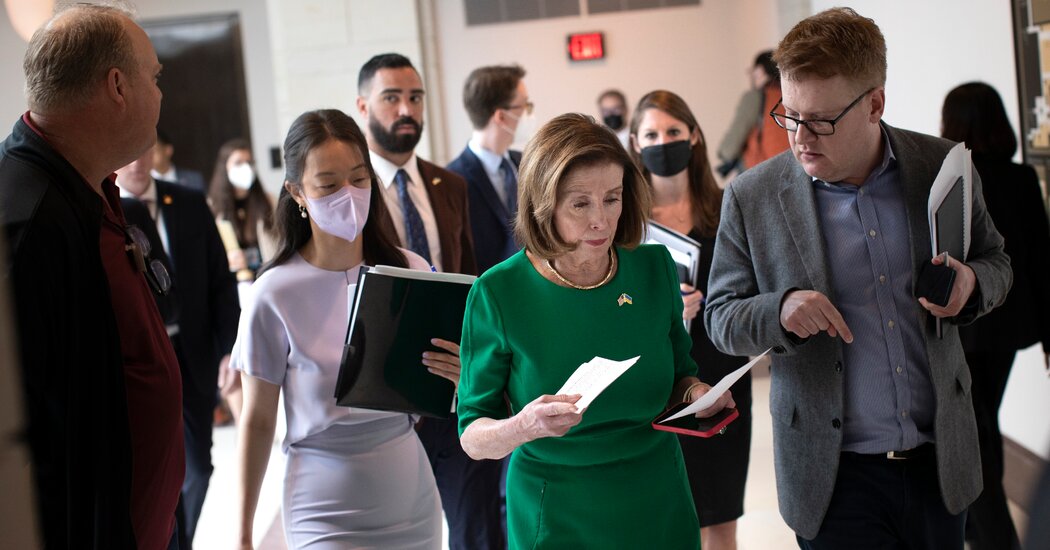 WASHINGTON — Speaker Nancy Pelosi said on Friday that the House would take action next week to address the baby formula shortage that has left parents desperately searching for food for their children, as President Biden pledged action that would result in more formula on store shelves within “weeks or less.”

In a letter to lawmakers, Ms. Pelosi said she would expedite a bill to grant emergency authority to the federal food assistance program for women and children to relax restrictions on the types of formula that can be purchased. About half the infant formula sold nationwide is purchased through benefits provided by the Special Supplemental Nutrition Program for Women, Infants and Children, or WIC. Loosening the rules could help ensure that recipients are able to buy whatever type is available.

“The babies are crying, and the babies are hungry,” Ms. Pelosi wrote. “So we must take urgent action to protect their health and well-being.”

She said her fellow House Democrats were also working on an emergency spending bill to “immediately address the infant formula shortage.” It was not yet clear how large the measure would be or where the funding would go, but aides said one proposal being considered was purchasing formula from other countries that have excess supply.

“We have to move with caution as well as speed,” Mr. Biden said at the White House on Friday, when asked whether the administration had responded quickly enough to a shortage that began in February. He called it the most urgent issue he was facing.

In terms of increasing imports, the president said, “we have to make sure what we’re getting is in fact first-rate product.”

Mr. Biden said the Food and Drug Administration was taking steps that would yield results in “weeks or less, getting significantly more formula on shelves.”

His quick timetable and Ms. Pelosi’s plans reflected a growing urgency to address the shortage, which has become a national crisis and a political challenge as Republicans work to weaponize the issue before the midterm elections.

The White House on Thursday announced a series of modest moves to help increase the supply of formula, including plans to increase imports and speed manufacturing.

Republicans have spent the past few days hammering Mr. Biden for the shortage, pointing to it as the latest example of Democrats being slow to address the most basic needs of American families, a central piece of their campaign message.

Republicans have latched onto a xenophobic talking point, amplified by Fox News and other conservative outlets, that Mr. Biden has prioritized undocumented immigrants over Americans by providing pallets of baby formula to detention centers on the southwestern border.

“American mothers and their babies shouldn’t suffer because of the #BidenBorderCrisis,” Representative Elise Stefanik, Republican of New York, posted on Twitter on Friday.

A White House official noted that it has been compulsory under the law since 1997 for border personnel to provide food, including baby formula, for detainees in their custody.

Navigating the Baby Formula Shortage in the U.S.

A growing problem. A nationwide shortage of baby formula — triggered in part by supply-chain issues and worsened by a recall by the baby food manufacturer Abbott Nutrition — has left parents confused and concerned. Here are some ways to manage this uncertainty:

Finding formula. If your baby’s formula was not affected by the recall, but is still not available, you can try calling local stores to ask when they expect to get it back in stock. You may also be able to buy it online. If your baby is on special formula, reach out to your doctor’s office: They might have samples in stock.

Picking a new formula. If you typically use a name-brand formula, look for its generic version. Alternatively, seek a new formula that matches the ingredients listed in your usual one. If your baby is on a special formula for health reasons, check with your pediatrician before switching.

Transitioning to a new product. Ideally, you will want to switch your child gradually. Start by mixing three quarters of your usual formula with one quarter of the new one and gradually phase out the old product. If you can’t transition gradually because you’ve run out of your usual formula, that’s OK, although you might notice more gassiness or fussiness during the transition.

What not to do. If you can’t find your baby’s usual formula, don’t make your own — homemade formulas are often nutritionally inadequate and at risk of contamination. Don’t try to “stretch” your formula by adding extra water, and don’t buy it from unvetted online marketplaces like Craigslist. For a baby less than 1 year old, don’t use toddler formula.

Democrats made #EliseStarvefanik a trending topic on Twitter on Friday, heaping criticism on Ms. Stefanik and other Republicans who have questioned the practice and noting that the alternative would be for the government to starve children in its care.

Representative Carolyn B. Maloney, Democrat of New York, and Representative Raja Krishnamoorthi, Democrat of Illinois, who chair the House committee on oversight and the subcommittee on consumer policy, sent letters on Friday to the top four formula manufacturers requesting information about what they were doing to address the shortage.

They said they were also seeking documents from Abbott Nutrition relating to the conditions of its shuttered formula manufacturing plant in Sturgis, Mich., that led to recalls of several of its products after four infants were sickened; two of them died.

On Friday, Abbott said it would extend rebates for alternative products through the end of August, in response to a letter from Tom Vilsack, the agriculture secretary, requesting that they do so.