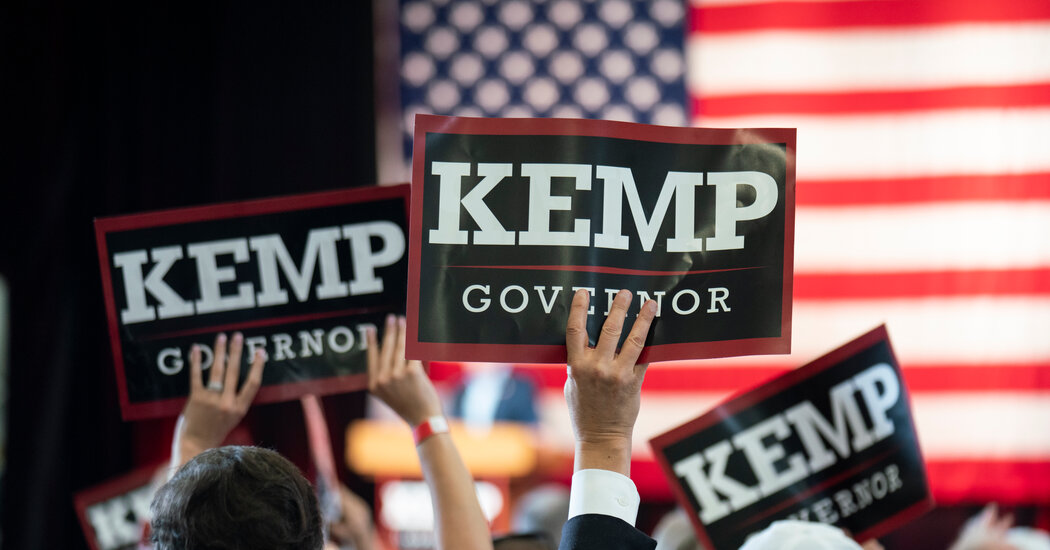 There are two Republican parties.That’s a vast oversimplification, of course. Republican pollsters have been known to sort G.O.P. voters into seven ca

Trump to governors: “They should deal with us effectively” if they need coronavirus assist
Trump Leaps to Name Photographs on Combating Coronavirus, Setting Up Standoff With Governors
In Virginia Governor’s Race, National Issues Dominate Ad Wars

There are two Republican parties.

That’s a vast oversimplification, of course. Republican pollsters have been known to sort G.O.P. voters into seven categories or more, ranging from committed Christians to pro-business types to squishy never-Trumpers.

But when it comes to choosing sides in primaries, a split is widening. There’s the national party, led by Donald Trump in Florida and Kevin McCarthy, the top Republican in the House, with Mitch McConnell, the Senate majority leader, toggling between foe and ally as the occasion warrants.

And then there’s the G.O.P. that is rooted in state power, run by a core group of pragmatic, often less hard-line governors who represent states as different as libertarian-leaning Arizona and deep-blue Massachusetts.

This week, the Republican Governors Association happened to be gathering in Nashville for its annual meeting. The guest of honor: Gov. Brian Kemp of Georgia, fresh off his 50-percentage-point drubbing of David Perdue, a former senator and businessman who had been dragooned into a primary by Trump. Kemp spoke at a dinner in Nashville on Wednesday night, thanking his donors and fellow governors for their support.

It was a celebratory moment for a tight-knit, fraternal group that was often in close contact during the crises of the coronavirus pandemic and the chaotic end of Trump’s presidency. Trump has leaned particularly hard on two of the most influential governors of the bunch, Kemp and Doug Ducey of Arizona, to support his fictional stolen-election narrative.

Many G.O.P. governors emerged from the Trump years in strong political shape, despite intense criticism. All 10 of the most popular governors in the country are Republicans, according to polling by Morning Consult. And sitting Republican governors have kept their hands mostly clean of Jan. 6, a toxic subject among corporate donors in particular.

To an extraordinary degree, these G.O.P. governors have joined forces to fight off Trump’s handpicked challengers as well as those currying his favor — raising millions and intervening in primaries to support their colleagues like never before.

“The president was on this campaign of vengeance,” said Bill Palatucci, a Republican National Committee member from New Jersey who is close to former Gov. Chris Christie, describing the thinking of those gathered in Nashville this week.

“But for lots of former and current Republican governors, it’s about doing the right thing for colleagues who have acquitted themselves well,” Palatucci added. Christie, a previous R.G.A. chairman who now helps run one of the group’s main fund-raising arms, remains actively involved in the organization.

Those running for office, like Kemp, have studiously avoided tangling with Trump. But others have been remarkably open about standing up to the man in Mar-a-Lago, unlike most of their colleagues in Washington.

Pete Ricketts, the governor of Nebraska and current co-chairman of the governors group along with Ducey, sided against Trump’s pick in his state’s Republican primary, Charles Herbster, and flew to Georgia to help Kemp.

Larry Hogan, the governor of Maryland and an R.G.A. board member, has spoken of fighting “Trump cancel culture” and called for a “course correction” away from Trump; Christie seems to be quoted criticizing the former president daily, including in a recent article in The Washington Post detailing the governors’ plans to stop what he called Trump’s “vendetta tour.”

Opposing Trump is costly, though.

Governor’s races don’t tend to attract the same big money that Senate races do. Why not? Because more donors across the country care more about the next majority leader than, say, who runs Nebraska.

But the cash Republican governors have raised to support one another is significant.

They spent $4 million in Ohio to help Gov. Mike DeWine, $5 million to help Kemp in Georgia, $2 million to support Gov. Kay Ivey in Alabama and put more than $80,000 behind Gov. Brad Little in Idaho, who was fending off a bizarre challenge from his own lieutenant governor.

To complicate matters further, there are states where Trump and the R.G.A. are on the same side. In Texas, Trump and the governors supported Gov. Greg Abbott. In South Carolina, both sides are backing Gov. Henry McMaster. And Trump is also supporting Mike Dunleavy, the governor of Alaska.

An open race in Arizona

It gets trickier when there is no incumbent governor.

The most interesting test is coming up in Arizona, where Trump has endorsed Kari Lake, a charismatic former television presenter who is an avid proponent of his baseless election-fraud claims. Lake is leading in polls of the primary, ahead of the favorite of the local Republican establishment and the business community, Karrin Taylor Robson, and Matt Salmon, a former member of the U.S. House who was the Republican nominee for governor in 2002, losing by a whisker to Janet Napolitano.

Ducey, who is term-limited, has said that he “reserves the right” to endorse a candidate in the primary, and Robson, a developer who founded her own land-use strategy firm, would be the logical choice. In 2017, he appointed her to the Arizona Board of Regents, which governs the state’s public universities. Robson was in Nashville this week, according to a local ABC affiliate in Phoenix.

The primary begins earlier than the Aug. 2 date on the calendar suggests. Arizonans vote heavily by mail, and early ballots go out to voters in July. That means the next few weeks are critical, and an endorsement could happen soon.

Will Ducey come off the sidelines? His confidants aren’t saying. If he did so, it would be in his personal capacity. But because he is co-chairman of the R.G.A., his imprimatur would send a signal to donors and other insiders that Robson is the one to back.

It would also set off another confrontation with Trump, who has blamed Ducey for failing to overturn Arizona’s election results in 2020.

Back in the fall, when Ducey was contemplating a run for Senate, Trump blasted him as “the weak RINO Governor from Arizona” and said he would “never have my endorsement or the support of MAGA Nation!”

He said much the same about Kemp — and lost.

Is there anything you think we’re missing? Anything you want to see more of? We’d love to hear from you. Email us at [email protected].