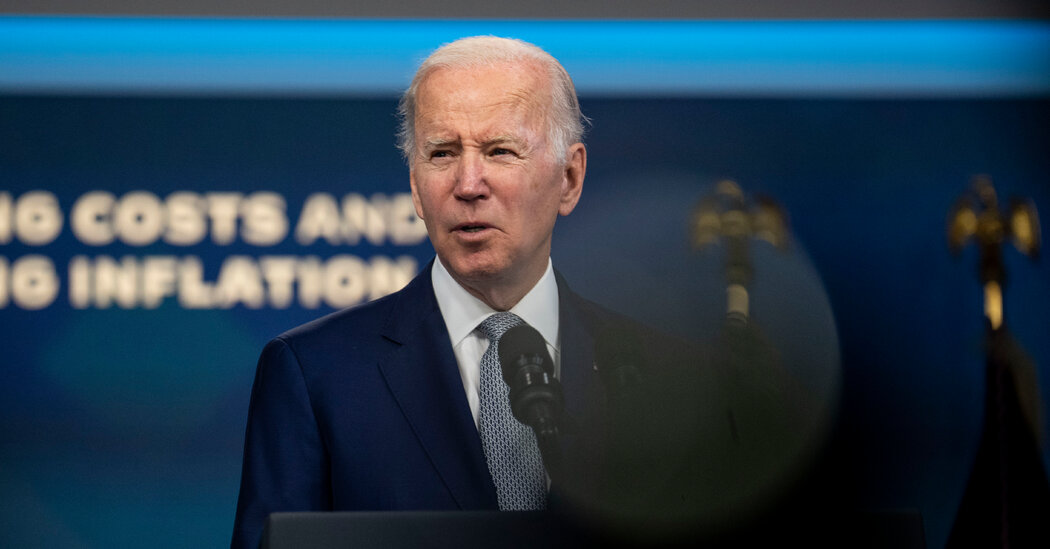 ‘Spend This Money’: Biden Calls on States to Devote Stimulus Funds to Police

WASHINGTON — Flanked by police chiefs from across the United States, President Biden on Friday praised state and local governments for committing to u

WASHINGTON — Flanked by police chiefs from across the United States, President Biden on Friday praised state and local governments for committing to use at least $10 billion in federal stimulus money to bolster police departments.

And he urged local leaders to keep the money flowing.

“My message is clear: Spend this money,” Mr. Biden said in the Rose Garden. “Do it quickly before the summer, when crime rates typically surge.”

As Republicans seize on rising violent crime to portray the White House as weak on law and order, Mr. Biden is making a push to show that he is a strong defender of the police ahead of the midterm congressional elections in November.

But the timing of his remarks, just two weeks before the second anniversary of the murder of George Floyd by a police officer, also frustrated progressives who say Mr. Biden has yet to make good on early promises to reform police departments accused of racial discrimination.

“The funding should be used to help residents hit hard by the pandemic and help them with longstanding disparities,” said Hannah Halbert, the executive director of Policy Matters Ohio, a nonprofit organization.

Instead, she said that officials seemed to be relying on traditional investments in policing. “You’re just going to double down on the strategies that have produced the outcomes we’re living under now,” said Ms. Halbert, noting that officials in Ohio had used stimulus funds to purchase police vehicles.

Last June, months after the passage of his $1.9 trillion pandemic relief bill, Mr. Biden announced that state and local governments would be allowed to dip into $350 billion in relief funds and use the money for public safety. On Friday, the White House said the $10 billion in spending was just an initial accounting; administration officials expect that more money will go to police departments as additional stimulus funding is paid out.

The White House hopes the spending will help forestall another spike in crime this summer. But some critics said the money should go toward addressing public health as well as economic pain caused by the coronavirus pandemic.

“We are trying to encourage localities to make those investments in health care, in education, in employment, in housing,” said Kanya Bennett, the managing director of government affairs for the Leadership Conference on Civil and Human Rights, a legislative advocacy coalition.

Congressional talks to overhaul police departments failed last year after nearly a year of negotiating. The Justice Department has announced federal investigations into police departments in Minneapolis and Louisville, but criminal justice advocates have called on Mr. Biden to make greater use of his executive authority to rein in the police. The outgoing White House press secretary, Jen Psaki, said on Friday that the administration was still in the process of finalizing an executive order on police reform.

Despite calls in the wake of widespread protests in 2020 to cut funding from law enforcement and increase spending on health care and education, Mr. Biden has said the best way to fight crime and bring about reform is to invest in police departments.

On Friday, Mr. Biden also commended states that used the funds to invest in community-based safety programs, such as a Wisconsin initiative that deployed community members to work directly with people who are the most likely to commit gun crimes.

“The best way to get the reform done as quickly as possible is to go local, and to make sure we invest in the police departments,” Mr. Biden said.

Speaking at the White House on Friday, James E. White, the Detroit police chief, said the money allowed him to expand a program that pairs police officers with social workers to better help those with mental illnesses. Asked for an example of how the federal funds helped his department, Chief White said the additional money had allowed him to hire someone to improve diversity in his agency.

The $10 billion figure does not include some state spending plans that are at odds with Mr. Biden’s public safety priorities, such as Alabama’s plan to use $400 million of pandemic relief funds to build two prisons, according to a senior administration official who spoke on condition of anonymity to discuss private deliberations.

While the stimulus package was intended to provide states with flexibility, the senior administration official said Mr. Biden spoke on Friday about providing funding for the police with the intention of putting his “thumb on the scale” and prioritizing spending on public safety.

In a private meeting in the Roosevelt Room with police chiefs and community leaders, Mr. Biden said that he wanted to continue investing in law enforcement but that the police should not be solely responsible for handling domestic violence situations or emergencies involving the mentally ill.

Some cities used the money for public safety initiatives that do not involve the police. Mayor Regina Romero of Tucson, Ariz., announced plans to use at least $7 million of the funds for intervention programs, youth employment and programming, work force development and mental health and substance abuse programs.

Liana Perez, the deputy city manager in Tucson, said the mayor and City Council had developed a strategic framework for the funding.

“So it’s not necessarily our police department, but it is community self-health and safety initiatives,” she said.

Ms. Perez said that the city never went down the path of defunding its police department, but that it had tried to add programs and services to help its police force. For example, Tucson created a community health, safety and wellness program in hopes of diverting some 911 calls to social services instead of the police.

“We knew that we had to address the challenges that law enforcement has from multiple directions,” Ms. Perez said. “Not just, you know, funding for new officers.”