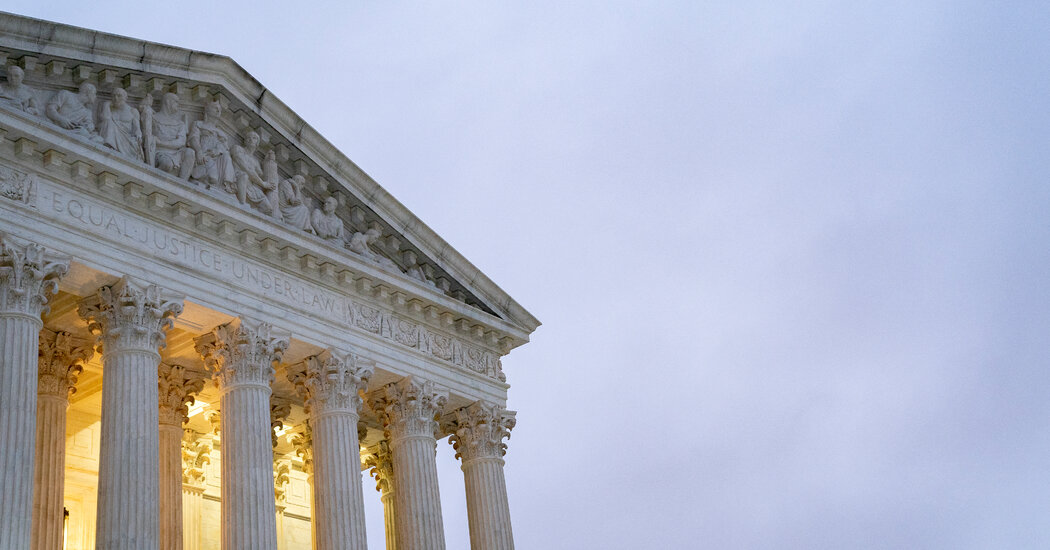 WASHINGTON — The Supreme Court on Wednesday appeared poised to reinstate a death sentence on Dzhokhar Tsarnaev, who was convicted of helping carry


WASHINGTON — The Supreme Court on Wednesday appeared poised to reinstate a death sentence on Dzhokhar Tsarnaev, who was convicted of helping carry out the 2013 Boston Marathon bombings.

Last year, a three-judge panel of the U.S. Court of Appeals for the First Circuit, in Boston, upheld Mr. Tsarnaev’s convictions on 27 counts. But the appeals court ruled that his death sentence should be overturned because the trial judge had not questioned jurors closely enough about their exposure to pretrial publicity and had excluded evidence concerning Tamerlan Tsarnaev, his older brother and accomplice.

The bombings, near the finish line of the marathon, killed three people and injured 260, many of them grievously. Seventeen people lost limbs. A law enforcement officer was killed as the brothers fled a few days later. Tamerlan Tsarnaev died after a shootout with the police.

After the appeals court ruling, lawyers for the federal government during the Trump administration urged the Supreme Court to hear the case. The Biden administration has pursued the case, United States v. Tsarnaev, No. 20-443, even though President Biden has said he would work to abolish federal executions and the Justice Department under his administration has imposed a moratorium on carrying out the federal death penalty.

The justices spent only a little time discussing whether the questioning of the potential jurors, which had taken 21 days, had been adequate. But the more liberal justices voiced concern about the exclusion of evidence that Tamerlan Tsarnaev had been involved in an unsolved triple murder in 2011 in Waltham, Mass. They said the evidence could have bolstered an argument from defense lawyers that Tamerlan Tsarnaev had controlled and intimidated his younger brother.

“The entire point of the defendant’s mitigation case was that he was dominated by, unduly influenced by, his older brother — and that would have gone to exactly that point,” Justice Elena Kagan said.

The argument did not seem to gain traction with the court’s more conservative members, who appeared to view the evidence as equivocal and speculative. It came from a 2013 F.B.I. interview with a friend of Tamerlan Tsarnaev named Ibragim Todashev.

Mr. Todashev said he had participated in the robbery of three drug dealers in Waltham in 2011. But he added that Tamerlan Tsarnaev alone had slit the victims’ throats. As Mr. Todashev started to write down his confession, he suddenly attacked the agents, who shot and killed him.

Eric J. Feigin, a lawyer for the federal government, said Mr. Todashev’s statements were “unreliable hearsay accusations” by “a dead man with a powerful motive to lie.”

Even if the trial judge had been mistaken in excluding the evidence, Mr. Feigin said, the error was harmless given the overwhelming evidence that Dzhokhar Tsarnaev was “a motivated terrorist who willingly maimed and murdered innocents, including an eight-year-old boy, in furtherance of jihad.”

Ginger D. Anders, a lawyer for Mr. Tsarnaev, disagreed. “The Waltham evidence would have changed the terms of the debate,” she said.

“The evidence’s exclusion distorted the penalty phase here by enabling the government to present a deeply misleading account of the key issues of influence and leadership,” she said.

Justice Kagan said the judge had allowed the jury to hear other evidence bearing on Tamerlan Tsarnaev.

“And yet,” Justice Kagan said, “this court kept out evidence that Tamerlan led a crime that resulted in three murders?”

Justice Stephen G. Breyer seemed to agree that the evidence was important.

“This was their defense,” he said of Mr. Tsarnaev’s lawyers. “They had no other defense. They agreed he was guilty. Their only claim was, don’t give me the death penalty because it’s my brother who was the moving force.”

But Justice Samuel A. Alito Jr. said he doubted that the evidence had much value. “This evidence is inadmissible many times over in a regular trial,” he said.

What to Know About the Supreme Court Term

A blockbuster term begins. The Supreme Court, now dominated by six Republican appointees, returns to the bench to start a momentous term this fall in which it will consider eliminating the constitutional right to abortion and vastly expanding gun rights.

The big abortion case. The court seems poised to use a challenge to a Mississippi law that bars most abortions after 15 weeks to undermine and perhaps overturn Roe v. Wade, the 1973 decision that established a constitutional right to abortion. The ruling could effectively end legal abortion access for those living in much of the South and Midwest.

A major decision on guns. The court will also consider the constitutionality of a longstanding New York law that imposes strict limits on carrying guns outside the home. The court has not issued a major Second Amendment ruling in more than a decade.

Justice Amy Coney Barrett asked whether the case before the justices was an empty exercise in light of Mr. Biden’s opposition to the death penalty and the moratorium on federal executions imposed in July by Attorney General Merrick B. Garland.

“I’m wondering what the government’s end game is here,” she said to Mr. Feigin. “So the government has declared a moratorium on executions, but you’re here defending his death sentences. And if you win, presumably, that means that he is relegated to living under the threat of a death sentence that the government doesn’t plan to carry out. So I’m just having trouble following the point.”

Mr. Feigin responded that the moratorium was in place to allow the government time to review its policies and procedures in capital cases and that the jury’s sentencing decision deserved respect.

Until July 2020, there had been no federal executions in 17 years. In the six months that followed, the Trump administration executed 13 inmates, more than three times as many as the federal government had put to death in the previous six decades.

There was no dispute about Mr. Tsarnaev’s guilt, Judge O. Rogeriee Thompson wrote for the appeals court panel last year. But, she added, “a core promise of our criminal justice system is that even the very worst among us deserves to be fairly tried and lawfully punished.

“Just to be crystal clear,” Judge Thompson wrote, “Dzhokhar will remain confined to prison for the rest of his life, with the only question remaining being whether the government will end his life by executing him.”