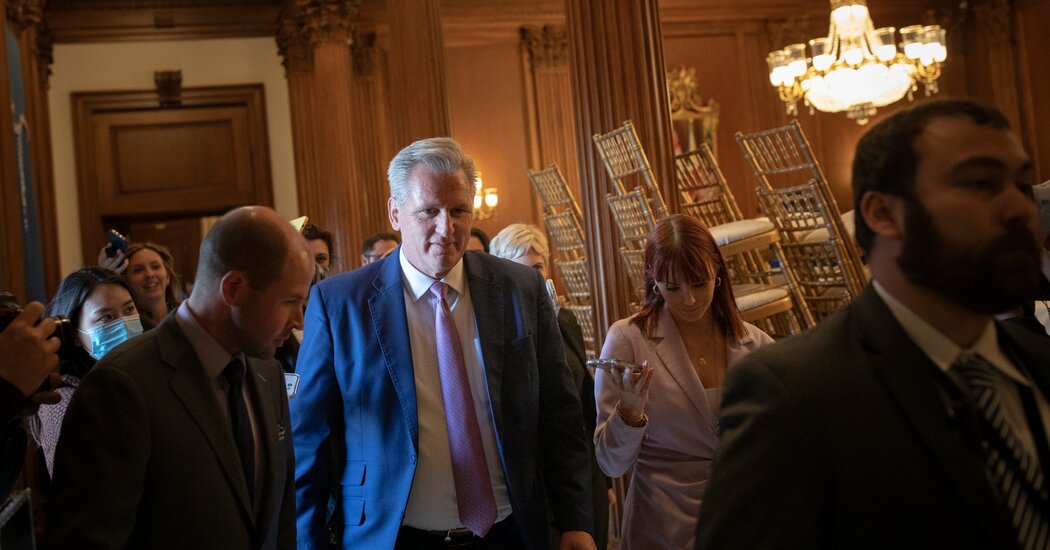 What the Jan. 6 Panel Wants to Learn From 5 G.O.P. Lawmakers

WASHINGTON — In deciding to take the highly unusual step of issuing subpoenas to five Republican members of Congress, the House committee investigatin

WASHINGTON — In deciding to take the highly unusual step of issuing subpoenas to five Republican members of Congress, the House committee investigating the Jan. 6 attack concluded that trying to compel their testimony was important enough to justify an escalatory step involving their colleagues.

All five of the Republicans subpoenaed on Thursday have previously refused to appear voluntarily before the committee. The most prominent of them, Representative Kevin McCarthy of California, is his party’s leader in the House and in line to become speaker if Republicans win control of the chamber in November. He has sought legal advice in recent months on how to fight a subpoena, though he has yet to say how he will respond to the panel’s action.

But the committee has made clear that it believes all five may have information that is important to its efforts to document efforts by President Donald J. Trump and his allies to overturn the results of the 2020 election, which culminated in the assault on the Capitol on Jan. 6, 2021, by a pro-Trump mob.

Here are the subjects that the committee could be interested in hearing about from each of the five Republicans.

The committee is seeking to question Mr. McCarthy about conversations he had with Mr. Trump during and after the attack about his culpability in the assault and what should be done to address it. The committee has also suggested that Mr. Trump, whose political support is vital to Mr. McCarthy, may have influenced the congressman’s refusal to cooperate with the investigation.

Mr. McCarthy has acknowledged getting into a heated argument with Mr. Trump during the Capitol attack, in which the president appeared to side with the rioters as they were tearing through the grounds.

According to Representative Jaime Herrera Beutler, a Washington Republican who has said that Mr. McCarthy recounted the exchange to her, Mr. Trump ignored Mr. McCarthy’s pleas to call off the rioters and sided with them instead, saying, “Well, Kevin, I guess these people are more upset about the election than you are.”

Interest in the details of those conversations has only increased in light of leaked audio in which Mr. McCarthy told colleagues that Mr. Trump had expressed feeling partly responsible for the attack.

The audio, obtained by The New York Times and released in April, showed Mr. McCarthy recounting an exchange with the former president, in which he claimed Mr. Trump had been relatively contrite about how his language concerning the election might have contributed to the riot.

“Does he feel bad about what happened? He told me he does have some responsibility for what happened, and he’d need to acknowledge that,” Mr. McCarthy said in the recording.

Earlier, Mr. McCarthy had told colleagues that he was going to push Mr. Trump to resign.

The committee first publicly approached Representative Scott Perry of Pennsylvania in December with a letter requesting information, in the panel’s first formal attempt to interview a sitting member of Congress.

Committee members have argued that Mr. Perry, who leads the deeply conservative House Freedom Caucus, was one of main architects behind a plan to install Jeffrey Clark, a former Justice Department official, as the acting attorney general after he appeared sympathetic to Mr. Trump’s false allegations of widespread voter fraud.

Mr. Clark appeared eager to pursue various conspiracy theories about hacked voting booths and other forms of election fraud, as well as to pressure state elections officials to overturn results in Georgia.

Committee members and investigators have said that Mr. Perry introduced Mr. Clark and the former president. They have also found evidence that Mr. Perry was frequently in touch with Mark Meadows, the former White House chief of staff, over encrypted messaging services in the weeks leading up to Jan. 6.

After the election, Mr. Perry helped assemble a dossier of purported instances of voter fraud and also encouraged Mr. Trump’s supporters to take part in the march on the Capitol that resulted in the riot.

Mr. Perry, a former Army helicopter pilot who is close to Mr. Meadows and another of the Republicans now under subpoena, Representative Jim Jordan of Ohio, coordinated many of the efforts to keep Mr. Trump in office. His colleagues referred to him as General Perry; he retired from the Pennsylvania National Guard in 2019.

Members of the committee have expressed interest in testimony from Representative Mo Brooks of Alabama after he broke with Mr. Trump and accused the former president of pressing him to find a way to remove President Biden from power.

While Mr. Brooks was initially among Mr. Trump’s staunchest allies in questioning the election outcome, their relationship soured after the former president withdrew his endorsement of Mr. Brooks in the Republican primary for Alabama’s Senate seat in March.

Before then, Mr. Brooks had campaigned on false claims that the 2020 election was rigged. He had been one of the speakers alongside Mr. Trump at the rally in Washington that preceded the riot.

But after the former president withdrew his endorsement, Mr. Brooks came forward with startling claims that Mr. Trump had repeatedly called on him to find a way to invalidate the election and somehow remove Mr. Biden. If the assertions are true, they would show that Mr. Trump continued his efforts to overturn the outcome long after leaving office. Mr. Trump has not denied making the statements.

His account of the conversations was the first time a lawmaker close to Mr. Trump had suggested that the former president had encouraged steps that, if taken, would have violated federal law.

In a letter to Representative Andy Biggs of Arizona in May, the committee’s leaders described evidence linking the congressman to a range of organizational efforts including “planning meetings” aimed at attracting protesters to Washington on Jan. 6.

The letter also described a scheme by several House Republicans to seek presidential pardons for “activities taken in connection with President Trump’s efforts to overturn the results of the 2020 presidential election.”

“Your name was identified as a potential participant in that effort,” it said.

It is unclear whether Mr. Biggs or other House Republicans formally approached Mr. Trump about what would amount to a pre-emptive pardon, or what crime those pardons would have been for. Mr. Biggs declined this week to answer questions about the potential pardons.

As one of Mr. Trump’s fiercest defenders in Congress, Mr. Jordan stood by him through several ordeals during his presidency, including operating as his chief defender during Mr. Trump’s first impeachment proceeding.

In the weeks after the election, Mr. Jordan met regularly with White House advisers to coordinate messaging about the outcome, often following up with false claims of fraud during media appearances.

Members and investigators on the House panel have pushed aggressively for details surrounding conversations between Mr. Jordan and Mr. Trump on the day of the riot, after call records indicated that the two spoke over the phone that morning.

Mr. Jordan was deeply involved in Mr. Trump’s effort to fight the election results, including participating in planning meetings in November 2020 at Trump campaign headquarters in Arlington, Va., and a meeting at the White House in December 2020.

On Jan. 5, 2021, Mr. Jordan forwarded to Mr. Meadows a text message he had received from a lawyer and former Pentagon inspector general outlining a legal strategy to overturn the election.

“On Jan. 6, 2021, Vice President Mike Pence, as president of the Senate, should call out all the electoral votes that he believes are unconstitutional as no electoral votes at all — in accordance with guidance from founding father Alexander Hamilton and judicial precedence,” the text read.

Mr. Jordan has acknowledged speaking with Mr. Trump on Jan. 6, though he has said that he cannot remember how many times they spoke that day or when the calls occurred. One of Mr. Jordan’s conversations with Mr. Trump that day, a 10-minute phone call, was included in the official White House call log.